Its products include casino chips, table game layouts, playing cards, dice, gaming furniture, and accessories and it sells to casinos throughout the world.

A man who claimed to be a member of the REvil gang had said in an interview given to the YouTube channel RussianOSINT on 23 October that the group was getting ready to attack a major gaming development firm and an announcement would be made about it soon.

He appears to have been referring to the attack on Gaming Partners International Corporation.

The attackers claimed all servers and working computers at GPI had been compromised and the data encrypted. They said 540GB of data had been exfiltrated, including technical documents, financial documents and contracts with casinos in Las Vegas, Macao and Europe, adding that bank documents had also been stolen. 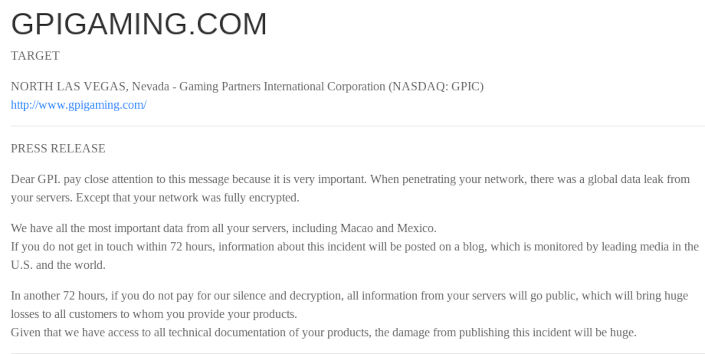 A screenshot of a part of the notice put up by the gang on the REvil website on the dark web. Supplied

REvil, which is also known as Sodinokibi, has been used in many attacks this year. It was used to hit the Meinhardt Group, an engineering consultancy with 51 offices worldwide and 5000 employees, American IT staffing company Artech Information Systems, and publicly traded professional distribution management firm DXP Enterprises.

More in this category: « Sophos launches rapid response service to neutralise cyber attacks Ransomware booms, but how many attacks achieve their ends? »
Share News tips for the iTWire Journalists? Your tip will be anonymous