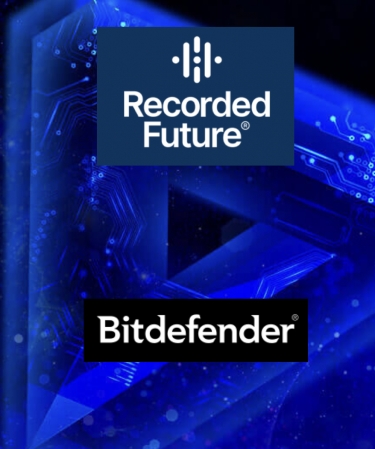 BitDefender and Recorded Future say the promise of "contextualised security intelligence" will drive "superior cybersecurity decision making and operational efficiency for enterprises and managed security service providers", so what are the details?

Bitdefender. It's one of the world's well known cybersecurity company that protects hundreds of millions of endpoints and systems worldwide, and the company has just announced "a threat intelligence sharing partnership with Recorded Future."

Recorded Future bills itself as "the world’s largest provider of intelligence for enterprise security," with partnership said to "enhance both companies’ breadth and depth of threat intelligence to provide customers with increased visibility at the apex domain level (the top-level domain) and actionable insights to eliminate cyberthreats from environments."

Of course, in an era of endless hack attacks, zero-day exploits, ransomware and more, all security companies need an edge to combat cyber crime, and the customers of both companies and the companies themselves will be the beneficiaries, and with advanced persistent threats and worse not just from cyber criminals, but nation states, such partnerships are welcome news.

Craig Adams, the chief of product and engineering at Recorded Future said: “Our unmatched, single source of truth for security intelligence is invaluable to our clients as they work to combat daily cyber threats.

“Enhancing our platform with threat intelligence from Bitdefender bolsters our endpoint data collection and further empowers our clients to accurately detect and assess threats. This partnership has already proved vital to our customers by magnifying visibility into current malicious campaigns.”

So, how will the companies work together?

While many organisations recognise the importance of threat intelligence, we’re reminded that “most do not have access to actionable data.”

In a January 2021 report titled: “How To Integrate Threat Intelligence Into Your Security Program”, Forrester Senior Analyst Brian Kime wrote “Good threat intelligence possesses all the necessary parts to provide the consumer what they need to take an appropriate action to reduce risk.”

“Bitdefender’s extensive global knowledge of real time cybercriminal activity is second to none. This collaboration with Recorded Future will provide better protection against emerging threats for organisations looking to improve their security posture and to become more cyber resilient against advanced attacks.”

Bitdefender reminds us that its threat intelligence is powered by the Bitdefender Global Protective Network (GPN), “an extensive network of hundreds of millions of sensors continuously collecting endpoint threat data worldwide.

More in this category: « Yet another Windows ransomware strain appears on the scene Coveware censors post after ransomware actors use it for promotion »
Share News tips for the iTWire Journalists? Your tip will be anonymous