Assange says he will fight US extradition request Featured 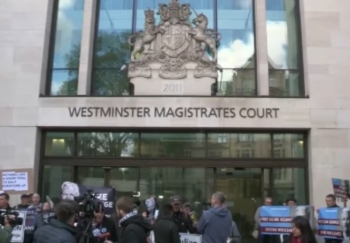 WikiLeaks publisher Julian Assange has told a court hearing in London that he is unwilling to surrender to be extradited to the US, just a day after he was jailed for 50 weeks for skipping bail in 2012.

Assange appeared through a video link and told the court: "I do not wish to surrender myself for extradition for doing journalism that has won many, many awards and protected many people," according to NPR.

The WikiLeaks founder was arrested by British police on 11 April after Ecuador withdrew its asylum and appeared in court shortly thereafter. He was found guilty of skipping bail and remanded to custody.

He had been wanted in Sweden for questioning on allegations of sexual assault which he has denied. But he has always maintained that he took refuge in the Ecuador embassy in London because he feared the US would try to extradite him to face charges over the release of thousands of documents relating to the US invasion of Iraq and the Afghanistan operation.

US Government lawyer Ben Brandon told the court on Thursday that Assange would face a prison term of five years if he was convicted.

He said the indictment was based on conversations between Assange and former US Army intelligence analyst Chelsea Manning.

The next hearings in the case are on 30 May and 12 June before which the full US extradition request will be provided to Assange's lawyers.

Swedish prosecutors have said they may reopen the case against Assange. Were that to happen, the UK would have to weight competing extradition requests from Sweden and the US.

EU criminal law expert Anna Bradshaw of Peters & Peters told NPR: "If Sweden were to make a competing extradition request then the home secretary here might choose to give that priority and that could mean that there is at best a delay to the US extradition request."

She said Assange's lawyers were concerned that he would not get a fair trial in the US.

More in this category: « Vulnerable consumers lose record amount to scammers: report Breach at outsourcing firm Wipro linked to 2017, 2015 intrusions »
Share News tips for the iTWire Journalists? Your tip will be anonymous