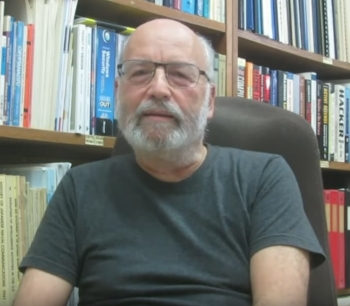 Adi Shamir: "Unfortunately, this year is different since I cannot enter the US." Courtesy YouTube

Turing Award winner and globally renowned cryptographer Adi Shamir has confirmed that the US Government did not grant him a renewal of his tourist visa and thus prevented him from attending the RSA Conference this year. He questioned whether it was time to think of hosting top scientific confernces elsewhere.

In a short video message sent to the organisers — it was screened during the Cryptographers' Panel on which he would have appeared — Shamir, who holds the Paul and Marlene Borman Professional Chair of Applied Mathematics at the Weizmann Institute of Science in Israel, said that he had applied for a US tourist visa two months in advance.

He said he had "not been given a yes, no or even a maybe" about his application. iTWire reported his absence from the conference on Wednesday.

RSA, named for Ron Rivest, MIT Institute Professor, MIT, Shamir and Leonard Adelman, all of whom were at the Massachusetts Institute of Technology at the time, is one of the first public-key cryptosystems. The algorithm was first described in 1978.

Shamir is also co-inventor of the Feige–Fiat–Shamir identification scheme, one of the inventors of differential cryptanalysis and one who has made numerous contributions to the fields of cryptography and computer science.

"As most of you know, this conference is very close to my heart," he said in his video message which was addressed to the panellists. "I co-founded it and over the last 27 years, I made sure to come every year to meet you, to share with you my thoughts and ideas and to hear your thoughts and ideas as well.

The Cryptographers' Panel at RSAC 2019. Shamir's message starts at about the eight-minute mark.

"Unfortunately, this year is different since I cannot enter the US. I applied for renewal of my tourist visa more than two months ago. Since then, I haven't heard anything - neither a yes, or a no, or a maybe or a timetable. I have been left in total limbo. So, unfortunately, I cannot be there.

"If someone like me cannot get a visa, a tourist visa, to enter the US, in order to give a keynote at _the_ major conference of his field, and since others are having similar problems, perhaps it's time we rethink the question of how, and especially where, we organise our major scientific conferences.

"So that's the way it is. I wanted to share with you some exciting news, in particular I wanted to tell you about some unpublished results related to the security of AES, but since the US Government is not allowing me to be there with you, I'll have to break the news at some other time and place."

Shamir was referring to the Advanced Encryption Standard, also known by its original name Rijndael, which is a specification for the encryption of electronic data established by the US National Institute of Standards and Technology in 2001.

Shamir ended his message by saying: "I am sure that you are still going to have a wonderful conference and I wish all of you a great week and I look forward to hearing about all the wonderful things which are going to take place at the conference. Goodbye."

Rivest expressed his disappointment about Shamir's visa issues, and said he would be personally writing to his representative in the US Congress to protest and hoped others did the same.

Another panellist, Shafi Goldwasser, director of the Simons Institute for the Theory of Computing, added that Shamir was not the only one who had faced a problem with getting a visa.

She said Shamir's case stood out because of his prominence in the field of cryptography, but there were others, some even from the same institute where Shamir worked, who had been unable to secure US visas to attend the conference.

Goldwasser said that representation had been made to the politicians involved, but "it's completely unclear who is in charge".

Whitfield Diffie, cryptographer and security expert, Cryptomathic, who was also on the panel, added, "It's embarrassing to be a Yankee some days."

More in this category: « TLS/SSL certificates regularly traded on the 'dark web' APAC companies hit harder by cyber breaches »
Share News tips for the iTWire Journalists? Your tip will be anonymous