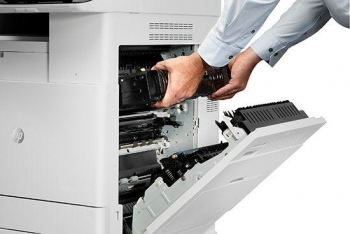 While HP has been a significant player in the consumer and business printer markets for many years, it has largely left the copier and mopier (multifunction copier) markets to traditional office equipment suppliers such as Canon and Fuji Xerox. But that's about to change.

The difference between multifunction printers and digital copiers (we'll keep things simple and use that term from here on to include mopiers) is really about speed, duty cycle, and finishing options. Copiers are generally faster, built to handle higher volumes, and offer finishing capabilities including stapling, punching and booklet making.

HP thinks it has assembled a set of technologies that will allow the company to have a big impact on the US$55 billion copier market, where it has a 3% market share compared with around one-third of the printer market.

During 2017, HP will ship a range of A3 MFPs and associated services that will deliver new levels of affordability, reliability and security.

There will be 16 different models available in a total of 54 configurations.

Three of the new models will be based on HP's PageWide technology (as used in the PageWide Pro 577dw). They promise low-cost colour printing with nominal speeds from 40 to 60ppm, or up to 80ppm in what HP calls "general office" mode – not quite top quality, but noticeably better than the "draft" mode found on some printers.

The remaining models will be based on colour and monochrome laser printing mechanisms, with speeds from 25 to 60ppm. While the LaserJet name will be used, some — possibly all — of them will be based on the laser technology HP is acquiring from Samsung.

HP South Pacific director of printing systems Ben Vivoda told iTWire that the new LaserJets are designed for ease of servicing. A relatively small number of sub-assemblies can be replaced quickly, minimising downtime. Those sub-assemblies will be remanufactured where possible, he added.

Another part of the broader package is HP's Smart Device Services. Vivoda explained this as a set of tools and sensing capabilities for monitoring and managing the new PageWide and LaserJet models (as well as existing devices with HP's FutureSmart capability), including remote diagnostics and remediations.

This means the company's channel partners will be able to provide their customers with better service by reducing downtime, providing just-in-time delivery of ink and toner, fixing certain conditions without needing a service call, and minimising the number of service visits that are necessary by swapping over any parts that are reaching the end of their service lives while a technician is on the premises. Furthermore, copiers typically require the replacement of up to 72 parts during their life, but the new PageWides need just seven.

The benefits to the end user are lower total cost and greater uptime, Vivoda explained.

These new models are "the world's most secure printers", according to HP.

They feature the SureStart technology from HP's desktops and notebooks to check the integrity of the firmware and to implement secure boot. An intrusion detection system is built in (and can be connected to existing monitoring tools), and whitelisting helps prevent unauthorised access.

“Today HP is changing the status quo with next generation A3 multifunction printers that bring to life a reimagined print environment that offers world class security, maximum uptime and affordable colour.”

The announcement follows yesterday's news that HP is to acquire Samsung's printer business for US$1.05 billion.

BACK TO HOME PAGE
Published in Print Solutions
Tagged under

More in this category: « Label everything and label often HP in the red with Choice over printer ink cartridges »
Share News tips for the iTWire Journalists? Your tip will be anonymous