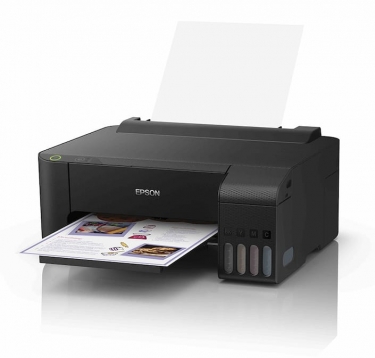 The lower-end of the printer market has long been characterised by the 'give them the razor and sell them the blades' philosophy: the hardware is sold at low prices, while the unit price of replacement ink – which comes in small cartridges – is high.

How high? High enough that some people reason that if a set of cartridges costs less than a new printer, they're better off replacing the printer rather than the cartridges. Apart from being wasteful, that's often a false economy because a significant amount of ink is needed to prime the plumbing.

Back in 2015, Epson introduced its EcoTank range of printers featuring ink tanks that be refilled from inexpensive bottles.

As we said at the time, EcoTank models reverse the usual approach of selling cheap printers and expensive inks – the purchase price is higher than that of otherwise similar models, but the ink component of the running costs is much lower. Epson suggested that you need to print more than ten pages a week to come out ahead.

EcoTank printers ship with enough ink to print thousands of pages – that's enough to last many customers a year or two, depending on their actual print volume.

Epson has now sold more than 40 million EcoTank printers around the world.

The remaining newcomers are all in the EcoTank monochrome (black and white) range.

The $299 ET-M1170 and $359 ET-M1180 are both single-function printers (like the ET-M1100 and ET-M1120 that were introduced around this time last year). The main difference between the two is that the ET-M1180 has an automatic duplex (double-sided printing) mechanism.

The cheapest multifunction model in the new range is the $399 ET-M2170 with Wi-Fi networking and auto two-sided print, copy, and scan capabilities.

Then there are the $482 ET-M3170 multi-function and the $519 ET-M3180 which add fax functions, an Ethernet interface, and a 35-sheet automatic document feeder. The ET-M3180 also offers PCL compatibility.

The new mono models all include enough ink to print up to 5,000 pages (replacement ink costs just $24.99 a bottle, giving an ink cost per page of approximately half a cent), first page out in six seconds, 20ppm (ISO), automatic duplex printing, a 250-sheet paper tray, and support for wireless printing from iPad, iPhone, and Android tablets and smartphones.

In related news, Epson Australia is currently running a Black Friday-Cyber Monday promotion that deals that include the option of getting an EcoTank ET-M1100 printer for just $1 extra with the purchase of selected EcoTank colour multifunction printers at full price.

BACK TO HOME PAGE
Published in Print Solutions
Tagged under

More in this category: « FULL LAUNCH VIDEO: Epson gins up a great new product range for late 2019 Canon Oceania 2020 Grants extended to include small businesses »
Share News tips for the iTWire Journalists? Your tip will be anonymous