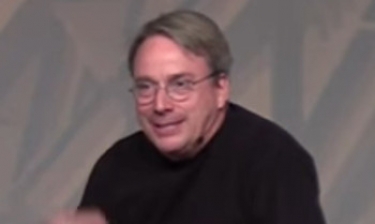 Linus Torvalds: "...it's basically a huge waste of people's time to now go over those things again just because one source has shown itself to not be above board." Courtesy YouTube

Linux creator Linus Torvalds says that while the submission of known buggy patches to the kernel team is not a huge deal, it is obviously a breach of trust.

Torvalds was reacting to the act by a group at the University of Minnesota who sent known buggy patches to senior developer Greg Kroah-Hartman in order to write a paper.

Kroah-Hartman, normally a man who is the epitome of politeness, lost his cool when these patches were sent as it needlessly created additional work for him. He maintains the stable line of kernels.

How did this proposal pass the ethics approval process?

"I don't really know what to say, I think the email thread is likely the most relevant information," Torvalds told iTWire in response to a query.

"I don't think it has been a huge deal _technically_, but people are pissed off, and it's obviously a breach of trust."

Kroah-Hartman told the university's Aditya Pakki that the buggy patches had been sent to see how the kernel community would react, so that some others at the same institution could write a research paper.

Despite these provocations, Kroah-Hartman used polite language in responding to Pakki and the university.

"Because of this, I will now have to ban all future contributions from your University and rip out your previous contributions, as they were obviously submitted in bad-faith with the intent to cause problems."

Torvalds added: "It's also annoying, because most of the patches are valid (and the ones that aren't are generally 'useless' rather than 'actively malicious'), so it's basically a huge waste of people's time to now go over those things again just because one source has shown itself to not be above board."

The university's Mats Heimdahl and Loren Terveen, head and deputy head respectively of the university's Department of Computer Science, put out a media statement after the story broke, saying: "Leadership in the University of Minnesota Department of Computer Science & Engineering learned today about the details of research being conducted by one of its faculty members and graduate students into the security of the Linux kernel.

"The research method used raised serious concerns in the Linux kernel community and, as of today, this has resulted in the University being banned from contributing to the Linux kernel.

"We take this situation extremely seriously. We have immediately suspended this line of research. We will investigate the research method and the process by which this research method was approved, determine appropriate remedial action, and safeguard against future issues, if needed."

Heimdahl and Terveen will issue a report about the incident as soon as they could, saying: "We will report our findings back to the community as soon as practical."

More in this category: « Uni group slammed over submitting known buggy patches to Linux kernel Uni bid to patch up with Linux kernel project fails to move maintainer »
Share News tips for the iTWire Journalists? Your tip will be anonymous