Torvalds breaks with past, apologises for abrasive behaviour Featured 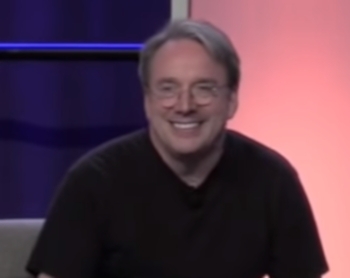 Linux creator Linus Torvalds has made an uncharacteristic admission that he needs to change the way he interacts with people on the Linux kernel mailing list and says he will take some time off and get assistance "on how to understand people’s emotions and respond appropriately".

Torvalds's confession was part of a long email which he sent about the latest kernel release and how his inability to manage his schedule had led to him being his usual explosive self.

He said he had messed up his scheduling of the annual maintainership summit and hoped that he would be able to avoid the yearly kernel summit. However he was forced to go.

At this point, he said, he realised that he "had been ignoring some fairly deep-seated feelings in the community".

"This is my reality," he said in what was probably his frankest statement for years. "I am not an emotionally empathetic kind of person and that probably doesn't come as a big surprise to anybody. Least of all me.

"The fact that I then misread people and don't realise (for years) how badly I've judged a situation and contributed to an unprofessional environment is not good.

Good on the people who took this up with Linus and good on Linus for acknowledging it finally. https://t.co/V7amVnLniZ

"This week people in our community confronted me about my lifetime of not understanding emotions. My flippant attacks in emails have been both unprofessional and uncalled for.

"Especially at times when I made it personal. In my quest for a better patch, this made sense to me. I know now this was not OK and I am truly sorry."

Torvalds added: "I am going to take time off and get some assistance on how to understand people’s emotions and respond appropriately."

At least one person greeted the statement with scepticism. Brad Spengler, who runs a firm named Grsecurity that puts out a hardening patch for the kernel, has sparred with Torvalds on occasion, with the latter once describing the Grsecurity patch as "pure garbage".

Spengler said on Twitter: "I'd like to believe this is genuine and not just his corporate masters finally having enough of Linus' behaviour, but I'll believe it when I see an apology in my mailbox", adding that the timing of publication by the Linux kernel team of a new code of conduct was odd.

He added: "Also, so I don't get accused of being flippantly cynical, I'll put this out for the record: after Linus' clowns/garbage comment, we had someone representing us talk to him in person at a conference, asking if he'd retract/rephrase it knowing that it was being abused by lazy/dishonest 'journalists' who care more about SEO and clicks than the truth (which people would have to dig to find, and he refused to.

"That to me signalled that Linus is a person fine with abusing his power and position of authority to unfairly try to ruin people he deems a threat to his status quo, and fine with using his mob of fanboys and de-facto PR to mete it out."

More in this category: « SUSE says 6000 firms running SAP Business One on its Linux New Yorker claims credit for Torvalds' apology on behaviour »
Share News tips for the iTWire Journalists? Your tip will be anonymous