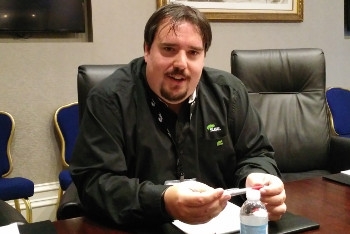 Richard Brown: one of the noisier openSUSE contributors. Sam Varghese

openSUSE, the community Linux distribution of the SUSE Linux company, has about 600,000 users judging by the number who access repositories each month for downloads, according to Richard Brown, the chairman of the project.

Brown told iTWire on the sidelines of SUSECon 2016, the annual SUSE Linux conference being held in Washington this week, that openSUSE was using the same methodology that Red Hat uses to count the users of its community project, Fedora.

"On that score, we are far ahead," he added.

Brown has been chairman for two years and an employee of SUSE for two years. He described himself as "typically one of the more noisier contributors".

A Briton who lives in Germany, Brown began his IT career as a sysadmin in the days when Novell's Netware was flavour of the times. He was thus familiar with Slackware which was one of the first Linux distributions to make its debut.

He was a customer for City College in Brighton which was seen as a case study for the use of SUSE Linux Enterprise Server in academia. In 2013, he was kind of burnt out and looking for a change of job. So he applied to SUSE and obtained employment as a QA tester. He is now the technical lead for openQA, the system that is used to test both the community and enterprise distributions.

When the openSUSE project kicked off in 2005, Brown began making small contributions. But many people weren't happy with the way the project was being run.

"Before 2011, everything wasn't great," Brown said. "The Novell-openSUSE relationship wasn't in a perfect place." In fact, he says in 2011 he spoke out against the direction that the project was taking.

But then once the Attachmate Group acquired Novell in late 2011, things changed. "They showed they knew how to deal with open source," he said.

It was all a question of organisational culture and attitude. "Novell was a typical American corporate that treated openSUSE at arm's length," said Brown. "The community was not kept in the loop." In short, it was all about control.

But once the ownership change occurred, the attitude became one of encouragement, enablement and partnership, Brown said. "You can judge the attitude by the fact that there is no community manager within SUSE for openSUSE," he added.

The openSUSE board has six people, five of whom are elected by the community around openSUSE each year. No more than two of these can be from a single organisation. Thus, at best one organisation will have 50% of the people on the board, including the chairman who does not have a fixed term.

"Other board members can ask for the chairman to be replaced," said Brown. "The board only acts as a general kind of organisational routing body."

openSUSE has two main streams of development known as Leap and Tumbleweed. The former is a stable release in many ways but it is not set in stone, said Brown. If there was a need to change a package or two after release, then it would be done.

Tumbleweed is targeted at those who like to live on the bleeding edge – but with tested packages. Brown said the openQA process was used to test all the software in this release too, so the chances of breakage were minimised.

More in this category: « SUSE first enterprise Linux to be ported to 64-bit ARM SUSE's Asia focus grows under new owners »
Share News tips for the iTWire Journalists? Your tip will be anonymous