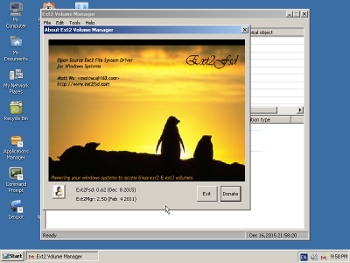 ReactOS, a free and open source operating system on which one can run Windows applications, has released version 0.4.2, within three months of its previous release.

The developers say this is an alpha release and anyone who uses it should be aware of this.

The system resembles Windows with the difference being that it is free, and provides an environment that can be trusted.

The most visible change from the previous release is the ability to mount and read UNIX filesystems such as the ext family, ReiserFS and UFS.

The release also refines the experience of users, especially with regard to the graphical shell and the file explorer.

ReactOS requires 500MB of space and 96MB of memory to run. Both Live CDs and Boot CDs are available for download from the project site.

Screenshots of the operating system running popular Windows applications can be seen here.

More in this category: « SFC's Kuhn in firing line as Linus Torvalds takes aim Silber, Sandler to keynote at Nextcloud conference »
Share News tips for the iTWire Journalists? Your tip will be anonymous