GitHub Copilot is now generally available to all developers 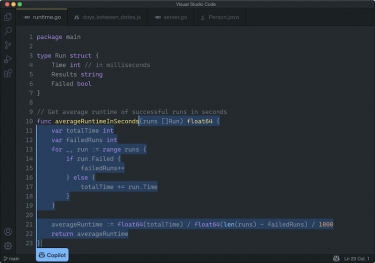 GitHub Copilot, an AI-powered pair programmer that suggests code in your editor, is now generally available to all developers for $US10/month, or $US100/year. It will also be free for verified students and the maintainers of popular open-source projects.

GitHub Copilot launched as a technical preview last year, and the company has found huge adoption with the editor extension distilling the collective knowledge of the world's developers to suggest code in real-time, aiding programmers in building great software.

When you type code or comments GitHub Copilot suggests the next line of code - but not only a single word or line of code; it will suggest complete methods, boilerplate code, entire unit tests, and even complex algorithms.

AI is being used in many fields, and with GitHub Copilot, AI can now be broadly harnessed by developers to write and complete code for the first time in the history of software. GitHub believes AI-assisted coding will fundamentally change the nature of software development just like the rise of compilers and open source. It provides developers with a new tool to write code easier and faster and helps them be more productive and happier.

Over 1.2 million developers used the technical preview, and GitHub says users quickly said it became an indispensable part of daily workflows. Where it has been enabled, nearly 40% of code has been written by GitHub Copilot in popular languages, and that fundamentally creates more time for developers to focus on solving bigger problems.

Also, it's free for verified students and for maintainers of popular open-source projects, because GitHub wants to give back to its vibrant community of students and creators.

If you're a student and want to participate in the program, apply for the GitHub Student Pack to get started. And if you’re an open-source maintainer, check out GitHub's FAQs to see if you qualify to start using GitHub Copilot at no cost.

The feature will be released to companies later this year.

More in this category: « Security starts with the developer - GitHub to mandate 2FA by end of 2023
Share News tips for the iTWire Journalists? Your tip will be anonymous