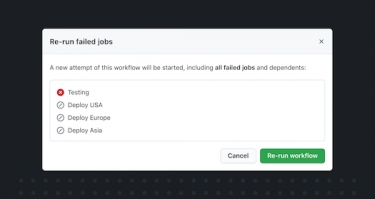 GitHub, the home to millions upon millions of open-source software projects, has provided new GitHub Actions features to re-run failed jobs or single jobs, to inner source automation, and to control access of self-hosted runner groups.

To better support teams of all shapes and sizes, new features and capabilities now available in GitHub Actions include:

More detail on these follows:

Many organisations today have secrets stored on their self-hosted runners in order to enable production deployments or other highly-privileged workflows. Previously, any workflow in the repository, such as an issue labeller, could access these runners, but that’s no longer the case. Now, admins can pick which specific workflows can access a runner group. This is a great way to secure your deployments if you aren’t ready to adopt OpenID Connect.

When combined with reusable workflows, this feature enables admins to enforce consistent usage of runner groups and workflows across their organisation. You can set this up easily:

It is now possible to re-run only failed jobs or a single job in GitHub Actions workflows. GitHub Actions workflows are powerful tools, enabling you to automate a wide variety of software development processes. However, these workflows can take a while to run, so when a small part fails, it is frustrating to have to wait to run it again. By re-running only failed jobs—or even just a single job—you save time, skipping work that’s already been done. If you frequently use GitHub Actions, this can help you avoid concurrency limits and frees up your self-hosted runners for other jobs. As a bonus, if you use GitHub-hosted runners, you can save money by reducing billable minutes.

If you have failing jobs in a workflow run, you’ll now see a new drop-down menu where you can choose “Re-run failed jobs” in addition to the existing “Re-run all jobs”. For a completed run, each job listed in the sidebar has a re-run icon when you hover over it. Jobs can also be re-run directly from the logs view.

With these new features, GitHub aims to help software teams be more productive and gain greater benefits from automation.

More in this category: « Three candidates in running to be Debian leader Canonical may go public in 2023, claims US$175m profit last year »
Share News tips for the iTWire Journalists? Your tip will be anonymous