Dana Lewis and Zui Dighe were named today winners of Red Hat’s Women in Open Source award for their altruistic work in collaborative and open healthcare.

“The awards recognise women who are making contributions to open source in new and brave ways,” Alexander said. “They were created to highlight contributions in open source by women, and to encourage other women to be involved in technology.”

One of the award judges was Denise Dumas, vice-president of Platform Engineering, Red Hat. “Every year we get more nominees and the quality is always increasing. What I look for, as a judge, are the things I value in open source – initiative, altruism, and work ethic. This year’s winners embody those principles,” she said.

Lewis is the founder of the open source artificial pancreas system and explained as a diabetic herself she felt the devices in use were limited but did not, initially, believe it was something she could solve as a patient.

Researching online she found people working on open source diabetic platforms and reached out, and found great support and encouragement and passionate sharing of code. This eventually led to Lewis to founding her own project, initially seeking to make her glucose monitor alarm louder, then collaborating with Scott Leibrand developed an algorithm to predict hours into the future and make recommended actions.

Lewis belongs to the #WeAreNotWaiting community but says the hashtag existed before she found the open source diabetes world. “You can wait,” she says, “but you can also use open source to solve some of the hardest problems, even dealing with life and death.”

“Open source is more than we think it is. I’ve been blown away by the support of people in my communities. If we take what we know in tech and apply it to healthcare we can solve problems more quickly.”

She says she knew she was interested in science, leading to her studies in biomedical engineering. Yet, she felt the classroom was dry and wondered how to make it more appealing. She joined entrepreneurship groups on campus and signed up to help with projects, to be asked to build a front-end for an intended system.

Looking online for inspiration and guidance, Dighe came across an open source project that effectively achieved the project goals. This fuelled her love of open source and she sought to apply it to her interest in health.

Initially, Dighe contributed to a project using Dana, a mobile development kit for health applications, to build an app to use with a low-cost colposcopy device for use in low-income communities.

Following this passion, she started working on a new project with a team of students from Duke and Makerere University in Kampala, Uganda. They worked together to remodel a vaccine carrier and introduce innovations based on open source technologies.

Dighe, along with classmate Ankit Rastogi, saw an opportunity for the technology to be used in the sustainable energy space, and the ensuing project was Schneider Electric’s 2017 Go Green in the City competition.

“We’ve also kept our code open source so that other people can learn from it,” she said. “Pick a project that you’re passionate about so that it’s not a chore. It’s something you’re really excited about. And at the same time, it’s building your resume, and you are learning.” 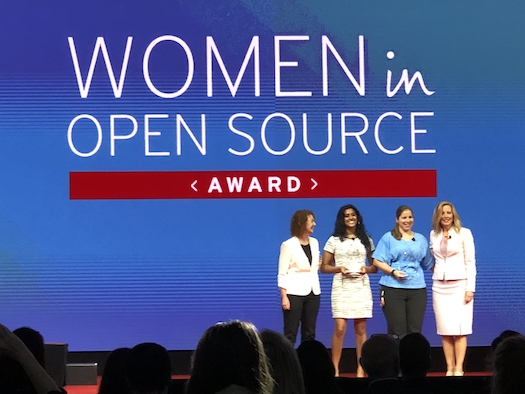 More in this category: « Microsoft and Red Hat Linux join forces to bring managed OpenShift on Azure Perens awarded costs and lawyers' fees in defamation suit »
Share News tips for the iTWire Journalists? Your tip will be anonymous