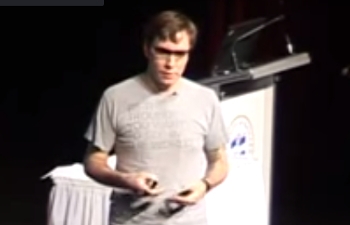 Linux Australia has predictably chosen to take the safe option in the case of well-known privacy advocate Jacob Appelbaum who has been chucked out of various free software projects and associations after sexual misconduct charges were levelled at him.

The organisation has said it will not place any restrictions on Appelbaum's potential participation in any of its events until "facts in this matter become clear".

Appelbaum, a developer at the Tor Project, stepped down from that organisation after the charges were made. His departure was announced by the project in a one-line statement on 2 June.

Tor executive director Shari Steele issued a longer statement on 4 June, saying that several complaints had been directed against Appelbaum and he had stepped down after extensive internal deliberation and discussion.

Since that time, several organisations have placed various strictures on Appelbaum. The Debian GNU/Linux project, one of the most respected free and open source communities, has revoked his developer status and also banned him from any of its events.

Hacker groups Cult of the Dead Cow and Noisebridge have asked him to leave and the well-known Chaos Computer Club has said he will not be allowed to attend its events.

Linux Australia was forced to consider the matter after one of its longstanding members, Russell Coker, suggested on Monday in a post to the main linux-aus mailing list that Appelbaum, a keynote speaker at the Australian National Linux Conference in 2012, be banned from future LCAs. 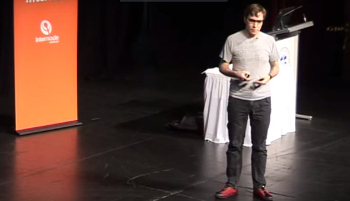 Jacob Appelbaum giving his keynote at LCA in 2012.

The organisation's president, Hugh Blemings, agreed to discuss the matter with his office-bearers at a meeting scheduled for Tuesday night.

"To the best knowledge of the Council of Linux Australia and the organisers of LCA 2012, there was no misconduct involving Mr Appelbaum reported during LCA 2012.

"Linux Australia encourages any attendee at a Linux Australia event to report violations of the event's Code of Conduct to the event organisers, and to contact support organisations and/or law enforcement as appropriate to the situation.

Asked by iTWire whether this meant the organisation had no faith in in any of the organisations that have acted against Appelbaum, Blemings replied: "Within Linux Australia we have sought to act in good faith based on the information available to us and in line with our organisations values and policies.

"We would hope that other organisations involved in the matter have done the same, based on information available to them and their own policies and values."

Asked for his reaction, Russell said: "I believe that the evidence against Jacob is convincing. He has a history of conference behaviour that violates the LCA code of conduct. To allow him to attend LCA is sending a message that the code of conduct doesn't matter.

"Hugh has asked for anyone who was treated badly by Appelbaum at LCA 2012 to contact the council. I think that we shouldn't wait for some past victim to talk about it or for someone to be attacked in the future."

More in this category: « Appelbaum banned from Debian events after sexual misconduct charges Red Hat earnings on track as it buys API management firm »
Share News tips for the iTWire Journalists? Your tip will be anonymous