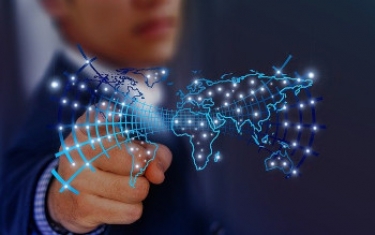 China has overtaken the US as the dominant nation as far as cross-border data flows are concerned, the website Nikkei Asia reports, pointing out the Beijing now accounts for 23% of the flow while Washington is a poor second at 12%.

This could provide China with a major advantage as the world looks to be splintering into two distinct tech camps, with one following the US and the other gathering behind China, the website claimed.

The statistics were gleaned from looking at data from the International Telecommunications Union and American research firm TeleGeography and showed that, of the 10 countries and regions studied, China, including Hong Kong, was way ahead.

Last month, noted US economist David P. Goldman had pointed out that the US Government had belatedly realised that aiming at 5G was the wrong target and it was now frantically warning European countries not to use the cloud business of Chinese telecommunications equipment vendor Huawei Technologies.

"The engine of the Fourth Industrial Revolution is artificial intelligence, and the fuel that powers AI is data. Huawei may be the world’s biggest telecommunications equipment company, with a 31% global market share during the first half of 2020, but its decisive business is the gathering and porting of data," he wrote.

It said Beijing had used its Belt and Road infrastructure project to push private sector firms like Alibaba and Tencent to set up branches in other countries.

As to what this would mean, Nikkei Asia reporter Ryohie Yasoshima wrote: "As China becomes a global data superpower, it will control huge quantities of a resource that will be invaluable to its future economic competitiveness.

"Data from foreign sources can provide an edge in developing artificial intelligence and information technologies."

Goldman made the point that the original rationale for Washington’s campaign against Huawei had to do with charges that the Chinese firm might use its buildout of mobile broadband to steal data from the West.

"Huawei claims that it can provide airtight safeguards against data theft. In any case, the advent of quantum telecommunications will before long provide end-to-end encryption over all broadband networks that is theoretically unhackable," he added.

More in this category: « Nokia to deploy Internet gateway for Iraqi network D-Link aims at M2M market with DWM-315 »
Share News tips for the iTWire Journalists? Your tip will be anonymous