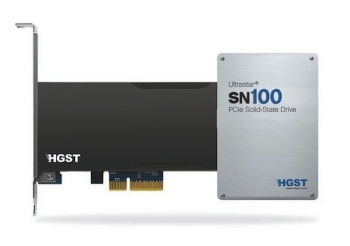 Enterprise storage vendor HGST has announced a raft of new products aimed at a variety of data centre applications.

The Ultrastar SN100 PCIe SSDs, available in capacities up to 3.2TB, are aimed at the application and database acceleration, virtualisation and big data analytics markets.

HGST will release NVMe-compatible extensions that will allow improved interaction between software and SSDs, giving up to twice the performance and endurance.

Ultrastar SN100 is also available in the normal 2.5in drive form factor.

HGST Virident Space is server-side clustering and volume management software that allows up to 16 PCIe storage devices to provide more than 38TB of flash storage as shared volumes.

It can also be used to simplify MySQL environments by allowing the use of a single stand-by server rather than dedicated replication pairs.

The Ultrastar He8 is now shipping in an 8TB model, as well as the original 6TB.

If price per terabyte is your concern, HGST wants you to know about the 5 and 6TB Ultrastar 7K6000 3.5-inch drives.

C0mpany officials say it is suitable for scale-out storage applications, including object, block and file storage architectures, and that it combines best-in-class 7,200 RPM performance and the best $/GB acquisition cost.

For those requiring greater storage density, HGST also announced what it says is the world's first 10TB hard drive for cloud and cold storage applications.

Currently only available in sample quantities, the drive is helium filled to reduce power and cooling requirements. It uses shingled magnetic recording to achieve high storage density, but this is more suited for sequential than random access.

The company is also looking to address the need to keep extremely large and growing data sets available for immediate though intermittent random access. HGST is working on a new range of 'active archive' products that unlike tape provide fast access to data, but with high storage density and relatively low cost.

The goal is a tenfold improvement in storage density and power efficiency compared with traditional enterprise data centre products and a fivefold improvement on scale-out products.

HGST is aiming for the lowest $/TB and Watts/TB ratios in the highest capacity per rack available.

Samples of the new platform have been delivered to selected partners, with details to be released in early 2015.