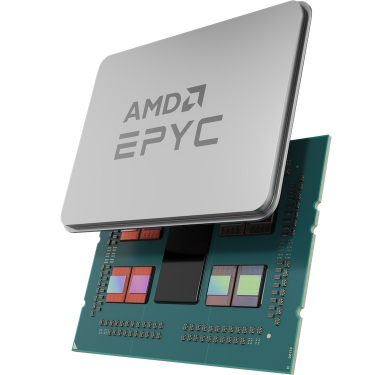 According to AMD, the 7373X CPU can deliver up to 66% faster simulations on Synopsys VCS (EDA) compared to the Epyc 73F3 CPU, the 7773X averages 44% better performance on Altair Radioss simulation applications (FEA) compared to "the competition's top of stack processor, and the Epyc 7573X processor can solve an average of 88% more CFD problems per day than a "comparable competitive 32-core count processor" running Ansys CFX.7

Systems based on 3rd Gen AMD Epyc processors with AMD 3D V-Cache technology are available immediately from a range of vendors, including Cisco, Dell, Gigabyte, HPE, Lenovo and Supermicro.

"Server density is critical to ensure organisations, such as those in digital manufacturing or critical product design, can handle their demanding technical computing workloads while pushing performance boundaries. Integrating the 3rd Gen AMD processors with AMD 3D V-Cache technology with the Dell PowerEdge portfolio is a natural next step to drive the future of HPC and technical computing for our customers," said Dell Technologies vice president of PowerEdge, core compute and high performance computing Rajesh Pohani.

They are supported by various software providers including Altair, Ansys, Cadence, Dassault Systèmes, Siemens, and Synopsys.

"The volume of cores that Synopsys VCS runs on in the latest 3rd Gen AMD EPYC processors is massive. With the significant memory and cache required by today's compute-intensive EDA workloads, the memory efficiency at runtime with VCS isexceptional and gives us a big competitive edge. Our close collaboration with AMD continues to accelerate technology advances for our customers by empowering them to tackle verification challenges and complexity of tomorrow's SoCs," said Synopsys vice president of engineering Sandeep Mehrotra.

More in this category: « China PC shipments for Q4 2021 grew by 9%: Canalys For Indian PC market, 2021 was best year in a decade: Canalys »
Share News tips for the iTWire Journalists? Your tip will be anonymous