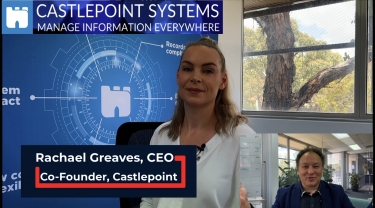 There's now a single solution to manage all of the information in your organisation, structured and unstructured, with AI to classify it all, and it's an Australian success story making waves on the global stage doing what was once infeasible - and today, a must for every organisation.

Castlepoint Systems. This multi award-winning regtech firm offers something new and disruptive - a single system that controls and manages all of the information in your company, government department, university or any other organisation.

The article has much more information about Castlepoint, and the video is embedded a second time below, so feel free to watch the video now if you want, or to keep reading more where you can watch it - and more - below.

The company explains it registers every record in every business system, and uses Artificial Intelligence to classify it against rules and regulations (including Records Authorities), and applies appropriate lifecycle controls.

Castlepoint acts as "a single pane of glass" to find, relate, manage, and audit every record in your network, no matter what system it is stored in, and it does this without any impact on your existing systems or your user base, and without complex rules engines.

So, how does Castlepoint Systems do this? It all starts with the "Data Castle."

The company asks us to imagine a castle on a hilltop. In the castle live the lawmakers, the guards and the overseers. From the castle, they can see the whole kingdom, enforce order, and protect the citizens. Those citizens can carry out their normal business outside the castle walls, in the normal way, under the aegis of the castle keep.

Castlepoint is a Data Castle. Your data stays in its existing systems, meaning there is no impact on users. Castlepoint sees, reads and registers every record in your environment, in any system, and classifies its contents using AI.

It then maps all applicable regulatory rules against the record automatically, to tell your compliance teams what needs to be retained for how long; what is high-risk; and what has high or low value.

Using everything it knows about each record, including its audit trail, Castlepoint helps protect information assets by alerting on breaches and providing powerful, contextual discovery across all systems.

And it does this without agents or connectors, and without performance impacts, easily scaling up to ingest huge amounts of information by simply adding more servers, delivering a new paradigm for information management command and control.

Compliance is no longer an issue, as it is handled by Castlepoint - even if the data is in dozens or even hundreds of systems, while security is absolutely a priority, enabling effortless discovery, with an accuracy that can do in one scan of the ingested information what took humans months of manual labour, as you'll learn about in the video interview.

There's a lot more to know about Castlepoint Systems, with its "about us" page an excellent summary of what the company does, how and why it does it, and its values, which are making the company a highly sought after place to work, and with its recent $3 million capital raising from the CSIRO's Main Sequence https://www.mseq.vc/ investment fund, and its latest award, being named in the Global 100 AI FinTech List.

So, to discover what else makes this remarkable company and its Canberra-based team special, we spoke with Rachael Greaves, the CEO and Co-Founder to learn more! The video interview is above, and directly below, after which is a summary of the topics we spoke about, after which you'll find two more video interviews Rachael conducted earlier this year with Ticker News and AusBiz Startup Daily, followed by more information on Castlepoint!

So, I genuinely urge you to watch this fascinating interview, where we learn about a great world-beating Australian company enjoying well earned-success, growing revenue by 20% per month, with an on-point team of founders and experts disruptively revolutionising the management and search of information - at just the right time, without disruption to the organisation, right when the exponentially flood of information can’t be handled anymore by legacy systems.

I really enjoyed speaking with Rachael, as I do with all of my video interview subjects, and it really is fascinating to see the ongoing creation and innovation of technology solving humanity’s ever evolving needs.

Technology gives humans super powers, with Castlepoint’s technology one to use, and one to watch!

Here's more information on why Castlepoint Systems has revolutionised and utterly disrupted information management for the better:

The digital age is well and truly upon us. Its impact on organisations has been profound and its disruptive nature continues to bring threats and opportunities. Organisations that once relied on traditional methods of controlling information are using systems that are no longer relevant or effective – data is growing too fast and increased regulatory requirements are making it impossible to keep up. Information is spread across hundreds of systems, devices, locations, and in many different formats. What’s more, there are many more people making data, using it, and sharing it further afield, heightening the risk of high-profile breaches and data theft.

The result is that too many regulated organisations are not secure or compliant. They cannot integrate information across different systems, they are losing documents, they are failing audits, they are wasting money, and they are at risk of large fines and reputational damage if breaches occur. The traditional systems intended to take care of this, such as EDRMS, were once considered non-strategic and often ignored. But this new world of digital disruption, exponential information growth, and increased regulatory scrutiny means attitudes are changing. Information and records management and security are now regarded as strategically important. The risks of failure are simply too high.

Recognising this shift in attitudes, and a gap in the market, Castlepoint was born. Developed from the ground up by two-founders who are specialists in this field, it uses a new approach called a Data Castle. This is a software system that oversees and controls all the information within a network ‘kingdom’ from its vantage point above those systems, without ever needing to customise, integrate, duplicate data, or cause manual work for users or managers. Using AI, it can find, relate, manage, and audit every record in the network, regardless of what system or format it is stored in. And it does this without any impact on an organisation’s systems or user base, and without any complex rules engines required to maintain it.

That means organisations can not only see what types of information they have, but also calculate their data risk and value, where is it held, who interacts with it, and what happens to it. This ensures the organisation is compliant, that the data is secure, all information is quickly discoverable, and the correct rules are being applied to it. Castlepoint provides productivity gains, new controls to meet regulatory requirements, and delivers significant savings in time and cost.

Castlepoint is a great example of Australian innovation and entrepreneurship using applied intelligence to achieve better outcomes. Better outcomes for clients and their customers, and better outcomes for society. Ultimately, when Castlepoint is implemented, organisations can for the first time have a complete understanding of what they have, where it is, who is doing what to it, and whether it is being managed according to their rules and policies.

More in this category: « Users can now ask data questions in plain language with Yellowfin’s Guided Natural Language Query Lakehouse and MLOps deliver value from data: Oracle »
Share News tips for the iTWire Journalists? Your tip will be anonymous