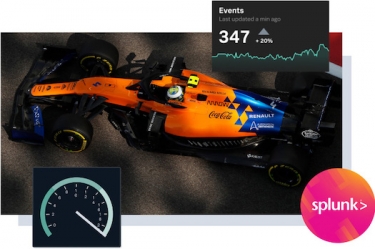 McLaren Racing was founded by New Zealand racing driver Bruce McLaren in 1963 and entered its first Formula 1 race in 1966. McLaren has won 20 Formula 1 work championships, over 180 Formula 1 Grands Prix, the Le Mans 24 Hours at its first attempt and the Indianapolis 500 three times.

McLaren's current racing team is Carlos Sainz and Lando Norris in the FIA Formula 1 World Championship, and Oliver Askew and Pato O’Ward in the IndyCar Series in North America.

Despite McLaren's impressive record-winning history, the organisation recognises the great value of technology to aid in eking out performance gains anywhere that it safely and compliantly do so. In a sport where times are measured in fractions of seconds, even the smallest improvement can mean the difference in first and second place.

However, the speed of a Formula 1 racecar and the volume of data that can be captured call for an enterprise-grade solution, and this is how McLaren and Splunk came to find each other.

The freshly-inked this week multi-year partnership kicks off from the 2020 Formula 1 season and makes Splunk an official McLaren Technology Partner.

“It’s great to have Splunk join us as both a McLaren Racing and McLaren Group partner. Data is at the heart of everything we do at McLaren and in the competitive sport of Formula 1, and the Splunk platform will enable us to continue to draw meaningful insights that can be used to impact performance,” said Zak Brown, Chief Executive Officer, McLaren Racing. “We look forward to working as partners for the 2020 season and beyond.”

“From the production line to the race track, Splunk will help McLaren drive meaningful business outcomes by connecting all of their data at a ferocious speed and at immense scale. Performance is critical in the racing world, and it is no different in the world of data, which makes this partnership a great fit,” said Doug Merritt, President and CEO, Splunk. “I’m looking forward to the Formula 1 2020 season and will be rooting for the McLaren Racing team across the globe.”

As part of the partnership, Splunk will be integrated into the branding of the team including on the sidepod and cockpit surrounds of the McLaren MCL35 race car.

Published in Data
Tagged under

More in this category: « Stellar Data Recovery Technician Review Three ways Melbourne can use interconnection to build a smarter future »
back to top