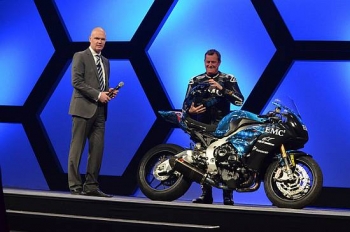 An EMC Business Data Lake is being used in a project that aims to help motorcycle racers to go faster yet stay safer.

EMC is working with 21-time Isle of Man TT winner John McGuiness in an attempt to determine what makes him go faster than most other riders.

A test bike has been fitted with a large set of sensors to measure things such as acceleration, braking and cornering angle.

Similarly, an Alpinestars racing suit has been made with "a couple of hundred sensors" for temperature, heart rate and so on. Some of the sensors are in intimate places, he joked.

Sensors have been used on racing bikes before, but this is said to be the first time that both the rider and the bike have been 'wired'.

McGuinness and another rider took the bike around a circuit in Spain, where some 700,000 rows of data were collected and stored in an EMC Business Data Lake.

Around 1000 data scientists are competing to determine the factors that made the biggest difference to lap times, with the winner to be announced on 22 May.

EMC senior director of corporate marketing Bharat Badrinath said some basic results had been determined from a subset of the data by EMC's own data scientists. For example, McGuinness's heart rate is consistently lower, and he leans deeper into some corners.

But the way all of these factors fit together is what makes this "a true data science project," Badrinath said.

"If it makes it safer for people in the future, so much the better," McGuinness told a small group of Australasian journalists. "I've won 21 TTs, but I don't really know how."

But McGuiness said he has already learned that he can lean even deeper and accelerate harder in some corners. "It's been really interesting for me."

Badrinath said various manufacturers have expressed interest in the project, including tyre companies that want to learn more about tyre wear under racing conditions.

More sensors will be fitted to the bike McGuinness will ride in the upcoming TT race, and the course is much longer that the circuit mentioned above, so the quantity of data will be significantly greater.

This data set will also be made available for outsiders to analyse, Badrinath said.

After McGuinness was introduced to the keynote audience at EMC World 2015 he allowed EMC chief marketing officer Jonathan Martin to ride the bike back into the wings. "I didn't expect him to ride off as fast as that," said McGuinness. 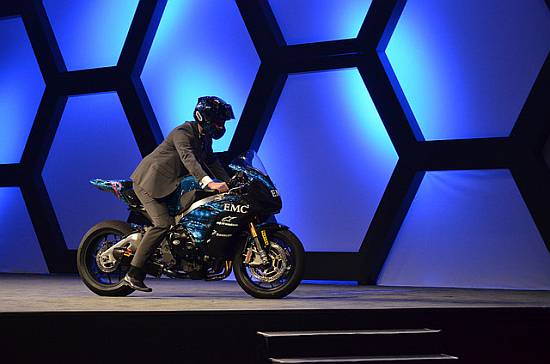 Disclosure: The writer attended EMC World 2015 in Las Vegas as a guest of the company.