Big Data: It’s all about analytics & competitive advantage, and not just for dummies Featured 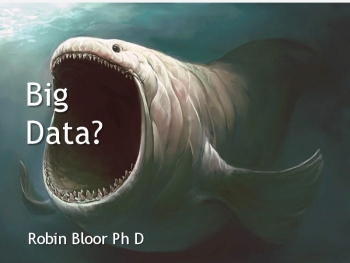 Robin Bloor – author of a number of books like Cloud Computing for Dummies, Management for Dummies, Words You Don't Know, The Electronic Bazaar – and Chief Analyst and Co-founder of the Bloor Group, has just finished telling an Australian audience this week that Big Data is not much more than an “utterly meaningless” term created by marketers.

Not that Bloor dismisses Big Data as anything more than a smart marketing way of describing one of the latest trends to sweep the technology industry.

To the contrary, Bloor says that companies leveraging Big Data are growing at a faster rate to their competitors and, indeed, espouses the fact that Big Data Analytics is transforming traditional business around the world.

Bloor was in Melbourne this week as the keynote speaker at a conference staged by Business Intelligence vendor Yellowfin for its customers and partner companies.

With one of the main themes of his presentation – ‘Discover the building blocks required to take Big Data from a laboratory experiment to creating business value’ – Bloor explained that already corporate data volumes are growing exponentially at about 55% per annum and, and have been growing at this rate for maybe 40 years.

He also emphasised that “there is nothing new about Big Data” and “it clings to an established exponential trend.”

Bloor also makes the point that some business leaders, from CEO down to C-level executives, are not sufficiently aware of the value to their business of the exploration and analysis of the large volumes of data (now called Big Data) they are now confronted with.

But, as he told iTWire, he expects this situation to change over the next 10 years, particularly with C-level executives.

“This is going to change in the coming 10 years and I’m absolutely convinced of that.”

Bloor makes his case for greater analysis of data (Big Data) - in the interests of businesses gaining competitive advantage - over the “well-developed intuition” that successful executives have about their businesses.

“Most of the people who get into those (leadership) positions, especially guys who are actually very successful, are in one way or another sort of intuitive about the business, and they believe in their intuition ahead of any base data analysis that would prove otherwise.”

And, according to Bloor, those are the people (C-level execs) that are going to be “brought down in the next decade…these people who believe that their instincts about the business are better, rather than if they did an analysis of the data actually gathered….and they might be among those successful CEOs or C level executives whose names might be in the business press,” Bloor adds, almost as an afterthought.

Bloor does make the point that organisations are now confronted with far bigger volumes of data – most of it unstructured – coming into their businesses, and arriving at far greater speed from many more different sources, then ever before.

According to Bloor, many businesses traditionally - in sectors like telecoms and banking – did have a lot of data to process and significant issues to deal with, but it was primarily internal data, and not data from external sources.

But now, telecoms, banks and other businesses are having to confront the even greater challenge of “marrying” the large amount of data coming in from those outside sources with internally-generated data.

“You might not have the meta data well structured and you might not know how to properly join it with (internal) data you are already processing. Then you have a whole set of problems you didn’t have before, and somebody actually has to resolve if they are going to use the data, some of which (consumer and essential network data) turns out to be very useful.”

“I think that’s really what is going on with Big Data that CIOs ought to be concerned with,” Bloor says.

Bloor does say, however, that if CIOs are not actually faced with a lot of external data then “there’s nothing that’s changed and they have nothing to be specifically concerned about as far as their internal data is concerned.”

And, he also says that if the situation has not changed, and a CIO is primarily dealing with internally-generated data, “then the words Big Data are utterly meaningless to you”.

On the challenge for any business of getting real value from timely analysis of the streams of data now coming in at greater speed, greater volume and from more sources, Bloor cites the example of telecoms and the continuing problem of customer churn.

“Telecoms have very specific problems that they wish to address and which affect their business.

“The big thing with telcos is customer churn and they are interested in analysing the situation around customer churn in anyway they can. So, there’s that dynamic where you already know what makes the business work, but there’s now more data for you to look at than you had before, and therefore you drag it in and you start doing analysis that you were doing before, but you’re doing it in a different way for many different reasons.

“One reason is that you have external data to marry in, but there’s also now a new set of technologies. The speed of parallel processing is applied to areas that can get you results faster than you have before.

“If you think of the simple situation of customer churn, the telecoms want to get to you before you come to the point of changing (to another telco). So, by analysing data (earlier) they can determine if you are likely to move away from them before you actually do move.

“They (telcos) have a better chance if it’s two days in which they can make some kind of offer that keeps you (as a customer), and if they have a month, or two months, it’s even better. If you can get that piece of knowledge earlier then it’s less expensive than if you have to make similar offers to attract new customers.”

Bloor also references the electronic games industry and its use of analytics to make millions of dollars from analysing the behaviour and the buying habits of millions of games players.

“We’re talking about millions of people playing some stupid goddamn game when you all pretend you’re a warrior from Viking times. You have data analysis on the back of this. They (gaming companies) basically want you to buy things, so they are looking at the behaviour of millions of players and they are discovering what eventually someone might buy, like buy a sword.”

“They are very successful and making many millions of dollars, and this is all being made out of analytics. It’s not because someone was a great games designer, it‘s all because of analytics.

“So now you see people coming out of those organisations (gaming) and going into other organisations and saying ‘I can change your business’.”

Bloor concludes our interview with a reference to the insurance industry as the “original data business”.

“That was the original data business, so if you want to look around now and see where data analysis is having a real impact you only have to look at those businesses where it’s pretty much all data and if they don’t use data really well they will be destroyed by their competitors.”

More in this category: « Data integration and analytics paying off for News Corp CommVault helps DAFWA declutter »
Share News tips for the iTWire Journalists? Your tip will be anonymous