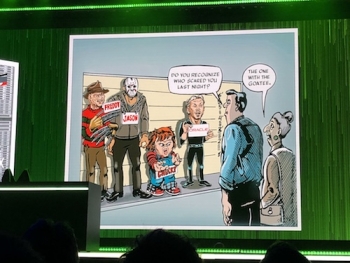 Delivering the AWS re:Invent 2017 keynote in Las Vegas this morning, Jassy likened the lyrics of George Michael to vendor independence, “All we have to say is that I don’t belong to you and you don’t belong to me … Freedom!”

Out of technology changes in the last decade, databases remain a barrier with “proprietary, high lock-in, and abusive customer relationships,” Jassy said, showing the assembled crowd of 43,000 attendees and a further 60,000 livestream viewers a cartoon line-up of creepy characters that included none other than Oracle’s Larry Ellison alongside horror movie favourites Freddy, Jason and Chucky. "Do you recognise who scared you last night?" a police officer asks an old lady. "The one with the goatee," she replies, surveying the line-up. 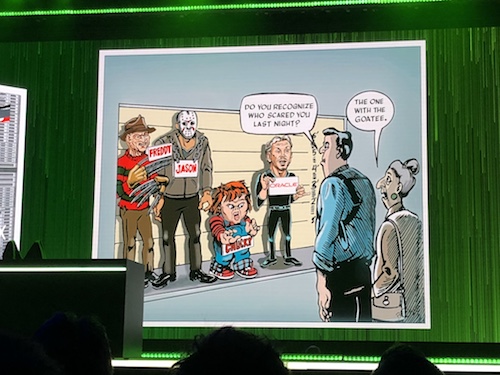 Ellison hit out at AWS last month during Oracle OpenWorld 2017 in San Francisco, claiming Oracle’s own cloud hosting would out-perform AWS and be cheaper too.

“We measure using standard TPC metrics which everyone uses,” Jassy said, before adding “except Oracle who make up their own".

“Aurora is the fastest-growing service in the history of AWS,” he claimed, referring to Amazon’s own database technology. “It offers scale-out for millions of reads per second, with up to 15 read replicas across three availability zones."

“We are now announcing Aurora multi-master,” Jassy said this morning, “which brings scale-out for reads and writes.”

“It’s the first relational database with scale-out across multiple data centres. It has zero application downtime from any node failure. It brings faster write performance."

Additionally, Jassy announced the release of Aurora serverless, an on-demand, auto-scaling serverless database for application with unpredictable or cyclical workloads.

“There’s no need to provision an instance,” Jassy said. “It automatically scales capacity up and down, it starts on demand, and shuts down when not in use. You pay per second and only for the database capacity you use.”

Jassy also announced the release of DynamoDB back-up and restore. “It’s the only cloud database to provide on-demand and continuous back-ups,” he said. “It can backup anything in your database, and give a point-in-time restore up to the second for the last 35 days. You can backup 100s of terabytes of data with millisecond latency and without interruptions to your application.”

The writer has been attending AWS re:Invent 2017 as a guest of the company.