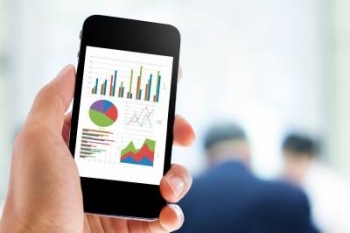 Mobile phone data downloads have soared to a record high in Australia, with the growth fuelled by rising app usage.

According to Ben Bucknell, chief executive of OnMarket BookBuilds (OMB) - the creator of an app giving investors free and fair access to Initial Pubic Offerings (IPOs) - new data released on Wednesday by the Australian Bureau of Statistics (ABS) reveals that the volume of data downloaded via mobile handsets for the three months ended 31 December 2015 jumped to a fresh high of 90,693 Terabytes. That’s a 27% increase in data downloads from the three months ended 30 June 2015.

And Bucknell says the ABS stats also showed there were a record 21.3 million mobile handset subscribers in Australia, an increase of 1.4% from 31 December 2014.

For the 21.3 million mobile subscribers, this equated to 1.4 GB of data downloaded per subscriber per month.

Bucknell maintains that as more and more Australians use smartphone to access the internet, and take advantage of innovative apps to source information, manage their finances and connect with others, growth in mobile downloads would continue at very high rates.

“We are an increasingly wired nation and it is very important for businesses to note - if your internet site isn’t yet mobile friendly and you don’t have an app, then you’re not likely reaching your audience and keeping up with your competitors.

“Australian consumers have shown a clear demand for accessing the internet on their smart phones and it is those business that make the most of technology and launch the most innovative and useful apps that will attract new customers.”

According to Bucknell, OnMarket’s new app is successfully drawing investors.  It’s free to sign up and free to bid and invest in IPOs. All of this can be done with a smartphone. Investors can easily swipe through the companies going public through the OnMarket platform. If an IPO interests them, members can see the prospectus and independent research about the company.”

“Our app has disrupted the staid world of financial markets and made it possible for retail investors to bid directly in IPOs for free. For the first time, companies can directly offer shares to the public, who can be guaranteed fair access.”

Bucknell cites the Investment Trends 2015 Second Half Online Broking Report, showing that 635,000 unique Australian investors placed at least one share trade through an online broker in the 12 months to November 2015, up from 595,000 in November 2014 (7% growth year on year).

And he says an earlier investment trends report found around 60% of Australian share investors used a mobile device to trade shares.

“OMB’s presence as a fintech disruptor was firmly established when the technology was launched by Prime Minister Malcolm Turnbull in October 2015, who said at the time: ‘The brilliance of this is simply that it makes it easier to buy, to trade. This will open up the investment market considerably’.”