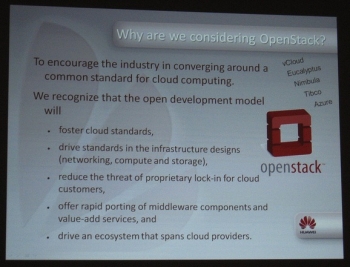 Oracle OpenStack for Oracle Linux, based on the latest Icehouse release of OpenStack, is now available for download.

Last December, Oracle became a corporate sponsor of the OpenStack Foundation and announced a set of plans to add OpenStack compatibility or integration to a range of its products.

The company has now released Oracle OpenStack for Oracle Linux distribution, based on the OpenStack Icehouse release.

Oracle OpenStack for Oracle Linux installs on top of Oracle Linux and allows the use of any guest operating system supported by Oracle VM, including Oracle Linux, Oracle Solaris, Microsoft Windows, and other Linux distributions.

Advantages of the distribution include integration with MySQL Enterprise Edition and Oracle ZFS Storage Appliance, high availability via Oracle Clusterware, and support for the Ceph object storage software.

Oracle provides single-source support for its customers, including infrastructure, Oracle Linux, OpenStack, the back-end database, and the guest operating system.

"Oracle is working with the OpenStack community and our partners to provide greater choice and interoperability for customers," said Oracle senior vice president for Linux and virtualisation engineering Wim Coekaerts.

"With Oracle OpenStack for Oracle Linux, customers can benefit from an enterprise-scale OpenStack solution. The flexibility we provide makes it easier for our customers to manage their environments."

Oracle OpenStack for Oracle Linux is offered for installation via yum or as an Oracle VM VirtualBox image for testing and demonstration purposes.

More in this category: « VCPro uses Nimble for DaaS Oracle expands its Cloud Platform »
Share News tips for the iTWire Journalists? Your tip will be anonymous