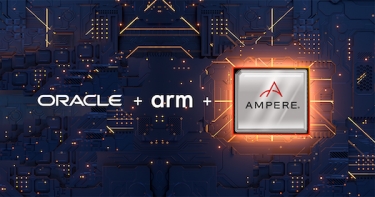 Oracle today announced a new range of Arm compute instances based on Ampere’s ARM processors along with the tools and support to accelerate Arm-based application development. The new Arm offerings clock in at a single cent per core hour, the industry’s lowest cost per core.

The x86 processor market largely warded off competition from SPARC, MIPS, PowerPC and Titanium options from the 1980s through the early 2000s, becoming the dominant CPU format. Today it’s a different story, with x86, GPUs and ARM.

Oracle has today unveiled its use of Ampere Computing's ARM A1 processor in new Oracle Cloud Infrastructure (OCI) compute instances. The new instances are priced at a single cent per core hour, and $0.0015 per gigabyte of RAM per hour, with options up to 160 cores, 1024GB of RAM and two x 50Gbps networking. As with its pre-existing compute instances, Oracle offers flexible virtual machine shapes for right-sizing without limiting users to specific configurations of CPU and RAM as its competitors do.

Chris Chelliah, senior vice president, Technology and Customer Strategy, Asia Pacific and Japan, said “the increasingly distributed nature of work means modern applications don’t just live in the cloud, it lives at the edge. In Asia Pacific this is being driven by smart industry-edge applications, real-time analytics and IoT, as businesses seek to improve operations and deliver new experiences to their customers. These applications need infrastructure that is open, extremely efficient, scalable and secure. This is what Arm architectures deliver and with the price-performance on offer we expect to see a rapid uptake in the region.”

Oracle Cloud's free tier provides developers $US 300 in free credits for 30 days, while the new Always Free Arm access provides four Ampere A1 cores and 24GB memory for free, perpetually. Oracle states this one of the industry’s most generous free cloud computing offerings.

All this said you might ask what can you really do with an Ampere Altra Arm processor running on Oracle Cloud Infrastructure? The Arm hardware is well-known for its use in smartphones and IoT devices and micro form factor PCs providing low energy consumption and heat emission. What may be less known is Arm’s scale, with Arm processors also powering supercomputers, servers, and automotive and industrial applications.

These are not mere tiny processors for small, heat-adverse purposes. Instead, the OCI Ampere A1 Compute provides superior price-performance for general-purpose workloads like web servers, application servers and containers, through to databases and analytics, mobile application development with no emulator required, and to computationally intensive and scientific applications.

Renee James, founder, chairman and CEO, Ampere Computing, said, “Ampere instances on OCI is a breakthrough for developers. Oracle’s Free Tier is a great offering that allows them to test the OCI Ampere A1 compute platform and experience the first-cloud native processor that delivers predictable performance, scalability and power needed. The Oracle dev cloud has all the tools developers need to try new technology, get excited about new platforms and develop new applications.”

“The infrastructure industry has been bound to a one-size-fits-all approach to computing, but the next era of compute relies on secure and powerful purpose-built processing,” said Chris Bergey, senior vice president and general manager, Infrastructure Line of Business, Arm. “By bringing to market Arm-based OCI Ampere A1 Compute instances, Oracle is giving customers and developers a choice that is flexible and able to deliver a new level of price-performance to further enable innovation in the cloud.”

The OCI Ampere A1 Compute instance is available now in the Sydney region, as well as other regions, as are the free offerings, making it a risk-free prospect to try it out right away. 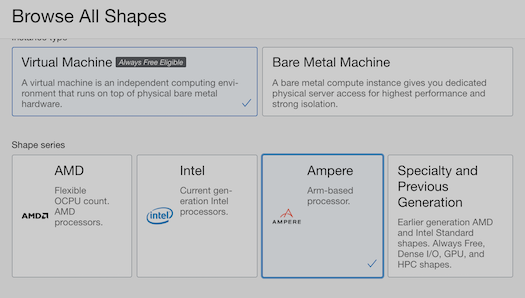 You can watch Oracle's announcement yourself, online.

More in this category: « Cloudability Shift helps plan financial side of cloud migration Amazon ECS Anywhere goes GA »
Share News tips for the iTWire Journalists? Your tip will be anonymous