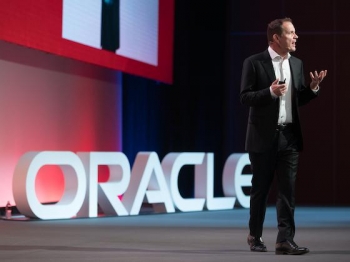 Oracle EMEA and APAC senior vice president of systems and technology Andrew Sutherland says the company's Gen 2 cloud gives access to unique services and is "not just another data centre."

Announced at Oracle Open World 2018 by CTO and chairman Larry Ellison, Oracle Cloud Gen 2 was designed from scratch, Sutherland told iTWire. Where most cloud architectures are based on single-tenant designs, Oracle started afresh in order to meet the requirements of hyperscale public clouds.

For example, the systems used to control Gen 2 are physically separated from those running customers' workloads.

There is a pronounced hunger for these services among larger organisations in Australia, because they see the potential for competitive advantage, said Sutherland.

"Oracle is providing far more than infrastructure," he said. "Our applications are evolving into intelligent business applications."

Rather than adding a separate ML engine, Oracle is baking such functions into applications.

Where business applications traditionally provide a rear-view mirror into activities (eg, how many widgets were purchased, and how many gizmos were made from them), modern applications can apply ML to provide advice about what to do next.

Examples include what to do with excess cash, determining to whom an issue should be escalated at that specific moment, or identifying the next best offer to present to a customer.

"It's a function within the application," he emphasised, not something that is bolted on as an afterthought.

This technology is also being applied in Oracle's Autonomous Database. One consequence is that it allows Autonomous Database to be used easily in trial situations, "almost like a digital laboratory." For example, organisations can explore the likely effects of price changes, or variations to sales compensation.

Such modelling is becoming increasingly common, Sutherland said. It requires large quantities of data, and Autonomous Database is easier to use.

More generally, its self-tuning, self-repairing capability reduces the cost of managing data, and the improved performance it brings is always noticed, he said.

Another important consideration is that the ML capability can detect deviations from normal patterns of use and thus help detect intrusions or cases of misuse by authorised users.

According to Oracle Asia Pacific group vice president and chief architect, technology and cloud platform Chris Chelliah, various trials are being conducted by local customers, including banks doing 'next best offer' analysis, retailers looking to move perishable stock between branches so it can be sold rather than wasted, and a theme park aiming to optimise its insurance cover by taking into consideration factors such as foot traffic, hotel occupancy and the weather.

Publicly acknowledged customers include National Pharmacies, which won Oracle Australia's 2019 award for excellence in retail, and is now, said Sutherland, working on services to support customers after they leave the store.

As for the recently announced Oracle-Microsoft cloud alliance, Sutherland said it is "a really nice example of the industry working together."

Historically, it was common to connect Windows desktop applications to Oracle databases. These applications now often run in Azure, which is "an excellent place to run Oracle Database in the cloud."

The alliance also provides interconnectivity between Oracle Cloud and Azure, so they appear as a single data centre, including single sign-on.

This allows the "move and improve" migration of existing workloads into the cloud as well as providing a platform for new developments.

"We've got a great deal of positive response" from customers, he said.