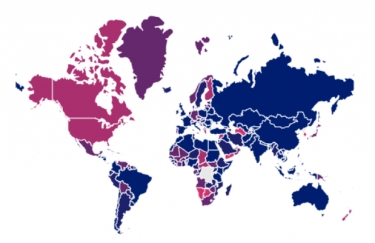 A recent survey has found that mobile data plans in USA are amongst the most expensive in the world while Australia ranks 34th.

This is the fourth annual survey by cable.co.uk and it shows that while there are interesting positional moves, little has changed over the life of the survey.

We have previously reported on this and similar investigations with significant fluctuations in position.

Taking a look at the data, one of the most striking observations is that mobile data is most expensive in countries where infrastructure is weak; and populations are small. Perhaps that’s obvious.

With that in mind, Cable.co.uk’s consumer telecoms analyst, Dan Howdle notes, “Many of the cheapest countries in which to buy mobile data fall roughly into one of two categories. Some have excellent mobile and fixed broadband infrastructure and so providers are able to offer large amounts of data, which brings down the price per gigabyte. Others with less advanced broadband networks are heavily reliant on mobile data and the economy dictates that prices must be low, as that’s what people can afford.

“At the more expensive end of the list, we have countries where often the infrastructure isn’t great but also where consumption is very small. People are often buying data packages of just a tens of megabytes at a time, making a gigabyte a relatively large and therefore expensive amount of data to buy. Many countries in the middle of the list have good infrastructure and competitive mobile markets, and while their prices aren’t among the cheapest in the world, they wouldn’t necessarily be considered expensive by its consumers.”

The disparity between the least and most expensive country averages is quite huge. Israel is easily the cheapest in the world at around $0.04 per GB while the island nation of Saint Helena is over 1000 times more expensive at over $41 for the same amount of data. Note that the report has converted all amounts to USD.

Broadly, according to cable.co.uk, we find that there are four controlling factors:

Excellent infrastructure: Countries with long-established, ubiquitous 4G or new 5G infrastructure tend to fall towards the cheaper end of the table.

Heavy reliance: Countries with little to no fixed-line broadband availability therefore rely heavily on mobile data provision. In these cases, mobile data is the primary means the population has of getting online, and adoption is often near-ubiquitous. With a saturated market and many competing providers, often accompanied by a low average wage, data pricing in such countries can be exceptionally cheap when compared globally.

Small consumption: Countries where, although mobile data is widely available and widely used, the basic and/or overburdened infrastructure dictates a limited-use culture. In countries such as these, SIMs tend to be relatively cheap but predominantly available loaded with very small data amounts. In such countries, amounts of 2-5MB and with single-day expiries are not uncommon. When multiplying such small quantities to figure out the cost of a gigabyte, then, such countries tended to find themselves at the most expensive end of the table.

Wealthy economy: Wealthy nations tend to have good mobile infrastructure, decently-sized data caps and relatively healthy markets. Since populations can afford to pay more, and network infrastructure costs that much more to own and run, and provided they haven't reached the 'excellent infrastructure' category where data limits are beyond normal usage or entirely unlimited, data pricing tends towards the global average.

We commend readers to visit the web site and view the data for themselves. We suggest you locate the world map on that page and hover over any country for detailed information. In addition, there are regional rankings and other detailed data as you scroll down.