Windows 10 is for business too 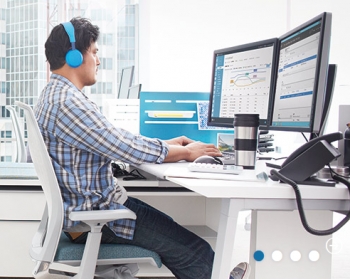 More than 14 million consumer downloads occurred within 24 hours of Windows 10 release on 29 July. That figure today is closer to 40 million.

Demand has been steady since to those who have reserved W10. The 3GB download has not crashed the internet as doomsayers predicted and there have been very few install issues.

“That’s because we had the largest Windows Insider program ever and every time we found an issue it was fixed in the next build,” said Microsoft’s Jaron Cohen.

But to achieve the ‘1 billion devices' that Microsoft expects it will have to conquer the business market where it holds in excess of 95% of the desktops.

I attended a W10 enterprise use briefing at Microsoft HQ in Sydney where new, independent research was released and where two larger enterprise users spoke openly about their decisions to move to W10.

Shaun Adams, Assistant IT Manager at Makita Australia – a fairly typical geek – stated “Man I tried to break W10 – just to say I had done it – but failed.” His message was that W10, despite it being a recent release is even more mature than Windows 7 – often cited as the most stable OS ever.

A similar message from Richard Fox Smith, IT Director, Brookfield Global Integrated Solutions who had implemented a trial first and is now happy to roll it out to hundreds of users. “It presents as a standard operating environment (SOE) across all devices and supports cloud first thinking. We deliver so many services via HTTPS (Internet) using SharePoint, Office 365 and our custom ERP system. We are not really sure why we need direct [network] access anymore.”

Both users agreed that W10 was the last piece in the puzzle to transform business to the mobile first, cloud first paradigm. They agreed that it was a great platform for the future, it facilitated the best use of cloud services like Office 365 and Skype for Business, supported Azure Active Directory out of the box and provided a single security model.

The research from TRA (Tech Research Asia) conducted on 301 Australian businesses ranging in size from five to more than 1000 employees showed that 75% will upgrade to W10 within 24 months (64% within 12 months). Key drivers were improving productivity, reducing the security risk using one OS on all devices, and developing a platform optimised to support mobility. Interestingly the larger 1000+ employee businesses were more bullish about upgrading as they probably had tested W10 and were satisfied that it was both an advanced and a mature OS.

Only 5% intended to stay with Windows 7 and the primary reason given was budget (which is unusual as it is a free upgrade).

The overwhelming majority of businesses see W10 as an improvement over W7 and 8.1. Their perception is that deploying W10 will be beneficial to support other technology solutions and initiatives. The top three technologies and services that respondents believe Windows 10 will let them take advantage of are:

But the overriding reason (75%) is that Windows 10 is an attractive unified platform for applications to run on all devices.

Shaun said “Look there is no doubt that Apple have won the handset war. Windows 10 is delivering on its promises and if W10 Mobile does the same then we will move to a consistent W10 environment. It makes sense financially (referring to Continuum and the ability to provide a phablet instead of a tablet to mobile staff) and simply from a system administrators point of view – one SOE. W10, Office 365, and Skype for Business allows us to get the ‘rubbish issues’ out of the way and let us build a business on this platform.”

Richard said that it was literally unheard of to make a substantial OS change but Brookfield had built an entire SOE in under three months – using cloud of course. He reiterated that the key was to use W10 with Office 365 and Azure cloud (and OneDrive).

He added “We have also been impressed with the security aspects of Windows 10, which is really important to us. We know it’s got the best versions of BitLocker and Direct Access, along with a whole lot of other tooling that we are expecting will make it the best and most secure operating system yet. Windows 10 is built to be mobile, and that combined with the security gives us great comfort around having data in the field.”

Jaron Cohen said that Microsoft had been happy to work with customers on ‘proof of concept’ – making sure that customers applications worked with W10 – and they did. There was no reason to hold back and the research on enterprise adoption supports that. Employees who see W10 at home via the free upgrade will want their employers to follow suit - quickly.