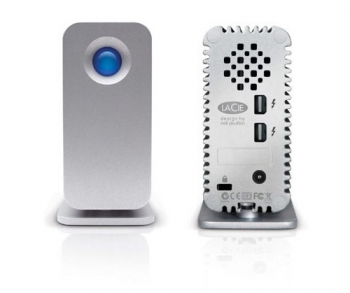 LaCie has tweaked its Little Big Disk Thunderbolt portable drives with the addition of SATA III SSDs to the range.

LaCie claims its SSD-based Little Big Disk Thunderbolt product is the fastest portable Thunderbolt drive on the market, with a read speed of up to 635MBps, more than three times that of the hard drive based models in the series.

This is sufficient to allow the simultaneous editing of six 422 video streams, matching the performance of rack-mounted fibre channel storage, officials claimed..

Available in 512GB and 1TB versions, the Little Big Disk Thunderbolt uses a pair of 2.5in SSDs that can be configured as RAID 0 for performance or RAID 1 for reliability.

"We saw an opportunity to make the LaCie Little Big Disk even faster and jumped on it," said Erwan Girard, professional business unit manager, LaCie.

"The new LaCie Little Big Disk can complete tasks in minutes that used to take hours. This saves our customers time and therefore money."

More in this category: « Imation IronKey adds to Windows To Go options HP launches BPO analytics »
Share News tips for the iTWire Journalists? Your tip will be anonymous