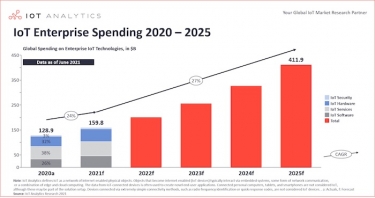 IoT Analytics, a market research firm specialising in Internet of Things market insights, released some forecast data on IoT enterprise spending 2020 to 2025, where it predicts global IoT spending to grow by 24% in 2021 led by investments in IoT software and security.

Spending on enterprise IoT solutions grew 12.1% in 2020 to US$128.9 billion, according to IoT Analytics latest update on the overall enterprise IoT market. It says the COVID-19 pandemic had vastly different impacts on different segments of the IoT market. For example, it believes spending on IoT hardware grew 5.4% in 2020, while spending on IoT cloud/infrastructure services grew 34.7% in the same timeframe.

It continues that many hardware installations were postponed as travel came to a standstill and capital expenditure budgets were frozen. At the same time, software tools, especially those that could serve as responses to the pandemic (e.g., IoT-based remote asset monitoring) and those allocated to operational expenditures, saw a smaller negative effect and in some rare cases even a pandemic-led boost.

It says that China managed to limit pandemic effects by acting quickly and decisively. As a result, enterprise IoT spending grew by 23.5%, nearly twice the global average.

Despite the continuing negative impact of the pandemic on IoT budgets, IoT Analytics expects 2021 IoT spending to increase 24.0%, with the overall market reaching $159.8 billion by the end of 2021.

IoT Analytics says that the post-COVID-19 digitisation push can already be felt, and it is its view that the increasing use of digital technologies will lead to a compound annual growth rate (CAGR) for IoT spending of 26.7% between 2022 and 2025. At the same time, it predicts the number of global IoT connections to reach 31 billion, tenfold what it was a decade ago.

IoT Analytics contends that due to low oil prices, IoT spending in the oil and gas industry was hard-hit in 2020, declining much more than the global average. However, IoT spending in warehousing companies rose by 22.3% in 2020 driven by the boom in eCommerce and online shopping.

IoT spending was mixed in the automotive industry. In 2020, IoT spending for Chinese car manufacturers grew nearly 20%, while Europe and South America grew at below-average rates.

IoT Analytics forecasts that 2021 IoT spending in pharmaceuticals, metals, and energy segments will be among the fastest growing.

IoT Analytics believes the regional differences can be explained by the evolution of the pandemic and related enterprise spending behaviour. An immediate and strong reaction to the COVID-19 outbreak helped APAC bounce back quickly. The enterprise IoT market in China, for example, grew 23.5% in 2020.

2021 IoT spending outlook: In 2021, the lasting push for digitisation is expected to lead to higher growth in all major world regions, with APAC leading, followed by North America and Europe.

IoT Analytics says that companies increased spending on IoT security in 2020 by 40.3%. The surge in high-profile security attacks led companies to increase spending in the areas of cyber- and IoT security. IoT cybersecurity incidents that were visible in the media, such as hacks of Amazon’s Ring cameras in late 2019, led to increased awareness of the need for better protection of IoT devices.

Correspondingly, a recent survey by IoT Analytics found that an overwhelming 83% of information technology professionals implemented stronger cyber hygiene among employees during the pandemic and plan to continue prioritising the subject after COVID-19.

Spending on IoT hardware in 2020 grew slower than IoT software spending in 2020. In 2020, companies spent 5.4% more on computers, gateways, sensors, chipsets, and other hardware as part of their IoT solution. Spending on specific subsets of the market, e.g., cellular IoT modules, declined by 8% in the same timeframe.

One area to watch in 2021 is spending on IoT chipsets (part of IoT hardware). IoT Analytics is forecasting a strong growth in 2021; however, ongoing supply issues might mean that the demand will not be met, even by the end of the year.

More in this category: « GlobalData: Indian telcos commence 5G trials but are plagued by financial difficulties Mobile data - speed vs. price »
Share News tips for the iTWire Journalists? Your tip will be anonymous