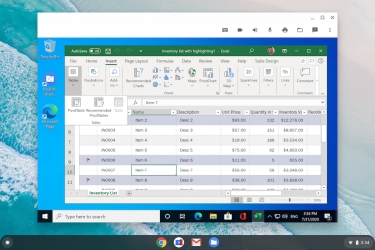 Google’s Chromebook has rightly earned a place in business and education with its secure and maintenance-free operation. Yet, there is often still a need to run Windows and Windows-based applications. Parallels has brought its virtualisation technology to Chrome OS allowing you to run Windows apps natively.

Parallels has a well-deserved reputation for excellent, seamless Windows virtualisation with Parallels for Mac hitting its 15th-anniversary last year. Now Parallels has brought its same magic to the Chromebook range.

This is no small feat; it's one thing to emulate Windows on an operating system such as macOS or even Linux where you can run any application of your choosing. It’s quite another for an operating system, like Chrome OS, which by nature is designed to restrict access to the underlying operating system and file system and to the applications you can execute. This is because, of course, Chrome OS simplifies the entire computing experience so users can enjoy a secure, maintenance-free experience where they simply run browser-based apps and never need to be concerned by viruses or updates or any of these things.

The appeal of Chrome OS for business, education, and individuals alike is clear: if you primarily consume SaaS-based software and use email and productivity applications, and don’t want to be bothered by faulty driver updates, or dealing with missing DLLs, or software version conflicts then a Chromebook really is a cost-effective simple, trouble-free option. If you manage a fleet of devices for a school or company Chromebooks help you help your users spend more time being productive and less time dealing with computer problems.

However, it's rarely that simple. No matter how much you rely on web-based tools there’s going to be some Windows-based application you must use from time to time. It might be the full Microsoft Office suite or Adobe Photoshop, it might be SQL Server Management Studio, it might be a warehouse management system, a learning management system, or it may even be simply to have an Active Directory domain-joined computer for resetting your password when it expires.

Whatever the case, when you need Windows, you need it, and here’s where Parallels comes in.

Parallels Desktop for Chrome OS was released in October 2020 as an out-of-the-box solution that allows full-featured Windows applications to run natively on the Chromebook as if they were local, no matter if you are online or offline.

iTWire tested out Parallels Desktop for Chrome OS and found a degree of performance beyond what we anticipated or expected, as well as a plethora of flourish and thought from Parallels to make the experience so much more enjoyable.

Chrome OS is a simple operating system; that’s by design and booting up Windows in a Parallels-based virtual machine for the first time is almost magical, like seeing virtualisation for the first time again. Windows applications run with alacrity and you could almost forget you’re using a Chromebook. Yet, take the window out of full-screen and there’s your Chrome OS launcher. 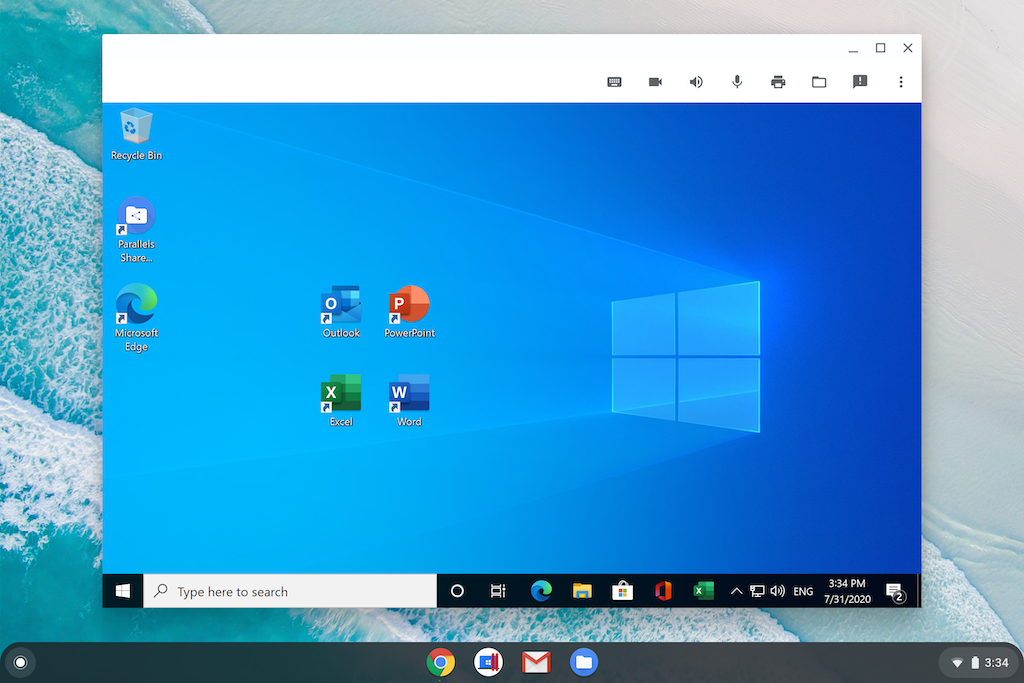 Like the Parallels experience on macOS, your key Windows folders - desktop, documents, downloads, and other custom folders, appear in your Chrome OS file system so you can easily transfer files or work on documents equally within Windows and in Chrome OS apps.

You can also drag-and-drop files and text directly between Chrome OS and Windows and the two operating systems will share a common clipboard too. You can print from Windows to your supported printers available in Chrome OS. You can use your Chromebook mouse, camera, microphone, audio, docks, and USB smart card readers.

In fact, the experience is so frictionless that you’ll find yourself working between Windows and Chrome OS applications intuitively and unconsciously.

iTWire was so impressed by the product's performance that we asked Parallels for insights, who explained Parallels Desktop uses a KVM engine included in Chrome OS to deliver CPU and memory virtualisation, and is further enhanced by hardware-supported Intel VT-x and AMD-V technologies. It reuses code already created and proven in Parallels Desktop for Mac such as Windows services for providing dynamic resolution, file sharing, clipboard, and the QT framework used by the user interface. It is not a browser-based app and thus does not rely on HTML5/CSS/JavaScript like a conventional web-based Chrome OS app might. Instead, it genuinely ekes the maximum out of your Chromebook hardware.

For an individual, Parallels for Chromebook can be the key to a simpler and happier computing life. Take up a Chromebook for your web usage without the overhead of Windows, but fire up Windows as needed without requiring a second device.

For the school or business, this can be the key to running a fleet of devices that reduces your onboarding time, your volume of Helpdesk tickets, your risk of contracting malware, but still providing access to essential Windows-based apps and services when needed, for those users that require it.

You will need to provide your own Windows ISO image and license, and you can find hardware specifications and manuals online.

Parallels Desktop for Chromebook is $99.99 per user for an annual license, but if you run IT for a school you can get a generous free one-year trial for yourself and your team, providing plenty of time to give it a thorough test.

A long time ago I asked if Chromebooks were a viable option for business, exploring whether I could perform tasks like software development, Remote Desktop, printing, video conferencing, and more. At that time it was not so easy and while web browsing and using Google apps has always been the Chromebook’ forte, Parallels has given - well, unparalleled - versatility on the Chromebook making it a viable platform for nearly any purpose because with Parallels there are no longer any restrictions to what you can do.

More in this category: « Nintex adds eSignatures to Workflow Cloud and Drawloop Progress updates UI libraries »
Share News tips for the iTWire Journalists? Your tip will be anonymous