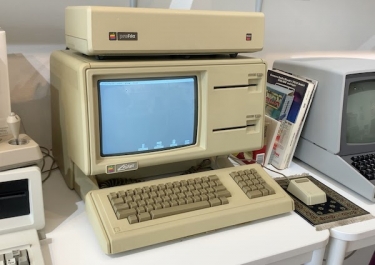 Before the Mac there was Lisa. It was forty years ago - January 1983 - when Apple released the short-lived Lisa computer, innovative for its team with a GUI in a personal computer. Now, its historic source code can be viewed by all via the Computer History Museum.

The Apple Lisa contained a GUI, inspired by Xerox PARC's Smalltalk system, but imbued with other innovations from Apple's user testing. It also sported a chunky mouse. Some forty years ago this type of system was known as a WIMP - windows, icons, mouse, and pointers - and it was a revolution in usability.

The Apple Lisa shipped with a business application suite consisting of a spreadsheet, word processor, and charting app, yet it had a significant flaw. Despite the IBM PC selling for only $1.5K at the time, the Apple Lisa was almost $10K. Apple pitched it to office workers but found offices were more than prepared to work with the disk operating system - or DOS - of the IBM PC for the vast difference in price.

And, of course, IBM's success led to the PC clone market explosion and with that, the fortunes of Microsoft whose MS-DOS drove them all.

Nevertheless, the Apple Lisa was a turning point in the history of computers and were it not for this experiment, we might not have seen the Apple Macintosh or even Microsoft Windows. And, to celebrate the milestone, the Computer History Museum has released the source code for the Apple Lisa which has been made public for the very first time.

It's a measly 7.2Mb in size - massive by the standards of past decades, but trivial compared to today's operating systems - and consists of assembly language and Pascal code, along with fonts and other items.

You can view the source code yourself here, and also read more about its historic significance in the Computer History Museum's blog post here.

The Apple Lisa source code exhibit is a part of the museum's Art of Code series. More information on this series is here. Other exhibits include the Apple II DOS, IBM APL, Apple MacPaint, Apple QuickDraw, and Adobe Photoshop.