Australia has more mobile devices than people, with there being something in the region of 1.25 mobile subscriptions per person.

There is, thus, a bewildering array of chargers lying around in every Australian home. At work, it is not uncommon to see at least one request a day for a charger of some description so that some forgetful soul can charge his or her device.

Here's where a gadget like the Portacharge comes in. Measuring just 105 by 78 by 16 millimeters, the Portacharge can charge a huge number of devices, ranging from a number of Nokia models to Samsung to Apple's ubiquitous i-Devices.

The Portacharge can be charged off the mains; an Australian plug that has an USB to mini-USB cable for connecting up, provides the charge. A digital display tells the user the percentage of charge.

The charge holds; it does not run down unless the Portacharge is used to charge a device. The devices are charged using a 10-in-1 USB cable. The devices that are supported are listed on the side of the packaging.

In my house I have five mobiles in use for four people - three Nokia, one Sony Ericsson and one Motorola. The Portacharge could not charge my Nokia N6 and the Sony Ericsson - it has no connector for the latter - but the other two phones were chargeable. 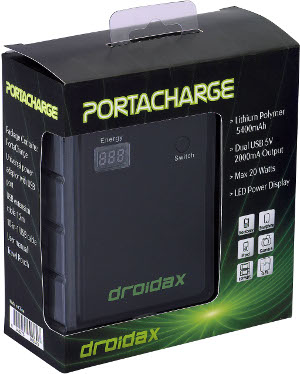 The Portacharge is well-made and sturdy and can charge many 5V USb devices up to 2A. It has a Lithium polymer 5400mAh battery, with a maximum power output of 20 Watts. The USB input is 5V, 1A. It weighs just 168 grammes.

One scenario where I can visualise the Portacharge being of tremendous use is during a long drive where children need to be kept quiet - and not inquiring "are we there?" every five or 10 minutes. Give each child a digital device and silence reigns - provided one can keep those devices charged and running for  the duration of the trip.

An additional use of the Portacharge came home to me yesterday when an unusual  situation presented itself - power went off for something like four hours and the only way I could keep my teenaged son quiet was by giving him the Portacharge so he could listen to music on his iTouch.

More in this category: Review: Samsung CLX-3175FN colour laser printer »
Share News tips for the iTWire Journalists? Your tip will be anonymous