Logitech G G413 keyboard: for gamers and the rest 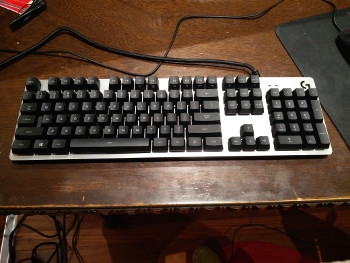 From the time you take the G413 out of its packaging, it is evident that this is a solid, high-quality keyboard – for any of you who unleash fury upon their keyboard after losing a close game (because of your teammates, of course), this keyboard will likely stand up to this. Disclaimer: this was not tested in this review.

The G413 has an aircraft-grade 5052 aluminium top case that is anodised for a quality shiny finish. The keycaps have a matte finish which looks great on the aluminium body of the keyboard and provide great grip whilst gaming or typing fast.

The cable is attached to the keyboard (no detachable cable) and splits into two – one for using the keyboard and one to use the USB port on the keyboard (note that both cables are not required to be plugged in for the keyboard to work). The G413 is not a 10 keyless keyboard – it has a full numpad.

The G413’s switches come with white LEDs for gaming in low light (or if you just like glowing keys). There are five brightness settings (including a no light setting), all of which can be toggled through easily, using the function key and F8. Additionally, there is a “breathing effect” function you can enable for the LEDs in the Logitech Gaming Software. 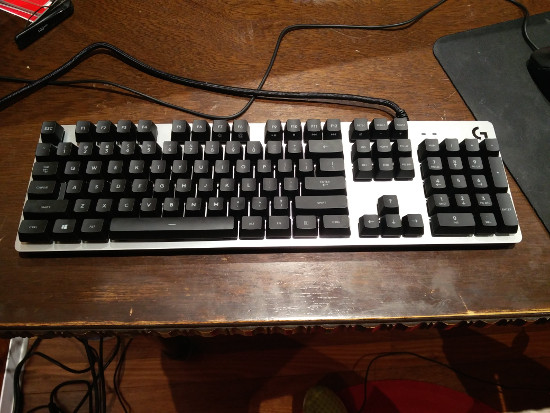 There are two LEDs to the top right of the keyboard indicating CAPS lock and gamer mode (which disables the Windows, function and menu keys in addition to other keys of your choosing). Scroll lock and Num lock are displayed on the desktop screen in the top right when you toggle them on and off.

The G413 also has several function keys that are bound to the top-right-most keys of the keyboard (F7 onwards). Pressing these keys in conjunction with the function key allows easy access to the backlight toggle, the gamer mode toggle, play/pause, stop, back, forward, mute, volume up and volume down. The function key can be inverted in the Logitech Gaming Software so that you need not hold the function key to access these.

As mentioned earlier, the G413 comes with a USB port, which can be used once you plug in the corresponding USB cable. The most useful application for this USB port is, of course, plugging your mouse in, but it can be used for just about anything. While the USB port is a nice addition, it is most likely not going to be the reason you buy the keyboard. In fact, I can see many people completely ignoring this feature – with me being one of them.

Logitech has advertised this keyboard as having 26-key rollover – a feature which enables a key to register even if 25 other keys are being pressed down at the same time. This “N-key rollover” feature is common with higher end keyboards, but in terms of practicality, even when playing games at around 300 APM (actions per minute) and typing at around 100 WPM, I have yet to find a time when I really need 26 keys to be registered simultaneously. 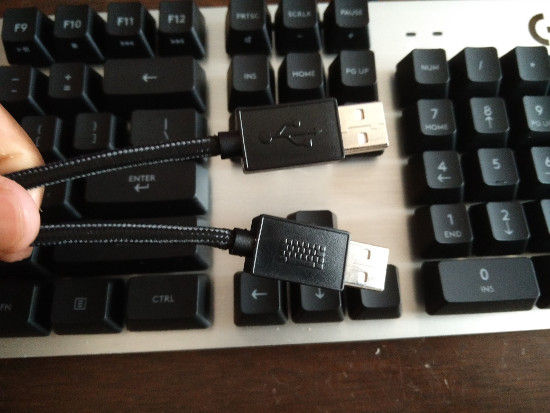 The switches are tactile – they have an ever-so-slight feedback close to the actuation point, but no click. The one thing that really stood out to me was how little distance these keys needed to travel before they were actuated – with just a light tap, the keys register. Logitech’s goal behind making the actuation distance so small (0.5mm less than most common Cherry MX switches) was to make keys register 25% quicker (than Cherry MX switches) – a stat that is advertised on their website.

Although the G413 will run fine without any software or drivers, Logitech does provide their own Logitech Gaming Software (LGS) to add some more customisability to the keyboard. LGS allows you to invert the function key (so you do not have to hold the function key), customise the F-keys (you can assign different commands to the F keys as well as macros with or without delays), customise the keyboard backlighting (including enabling and customising the “breathing effect”), and assign different gaming profiles for different games (allowing you to disable different games when running that game in gamer mode). There is a function which will let you record all your keystrokes and tell you which buttons you pressed most frequently for that period.

I have had little experience with LGS since the games I play (Starcraft: Brood War and Starcraft 2) do not benefit greatly from setting macros (in fact, I believe if you are found to be using macros in Starcraft 2, your account will be banned). However, for those playing other games that would call for macro use (MMORPGs, mainly), I cannot imagine one requiring more functionality than what LGS provides.

LGS also allows one to assign applications and common keyboard commands (such as copy/paste/close window etc) to them. This makes the keyboard not just useful to gamers, but the general public who just want a little more efficiency navigating their computer.

My games of choice for testing this keyboard were StarCraft 2 and Starcraft: Brood War. I quite liked playing on the Romer-G switches. As mentioned earlier, I found the matte finish of the keyboard offering a slight bit of extra grip – whether or not this finish will degrade over time is hard to tell.

Anyone who is not used to tactile switches is likely to take a bit of time adjusting to these keys – having just previously come from using a Razer BlackWidow that has Cherry MX blue switches which have a tactile feedback, I often found myself hitting keys by accident. Other than my own clumsiness and not being used to the keyboard, this was most likely a result of the low actuation force and low actuation distance. However, after a good few hours of gaming, I got more used to the keyboard and this happened less often. Of course, with FPS and MOBA games, where your hands are not required to move all over the keyboard, this is less likely to happen.

It was very hard to notice the keys registering 25% quicker compared to other mechanical keyboards I have used in the past, since I bottom out my keys. The difference is certainly detectable if you have the keyboards side by side and press the keys down very slowly. However, in the heat of a game, when you are mashing away at the keyboard, this improvement on the already fast registering Cherry MX switches is very hard to pick up.

The G413 is great for typing as well – as someone who already types relatively quickly, I found the low actuation force of the Romer-G switches particularly enjoyable, since only minimal force is required to actuate the keys. Another benefit of the G413’s Romer-G switches is typing for long periods will not take quite as big a toll on the forearms as would other keyboards.

In terms of aesthetics, the G413 is a sure winner – the sleekness of the design screams quality. However, keyboards are seldom looked at directly while gaming or typing. For this reason, I believe feel/quality, customisability (if you like to use and assign macros to your keys) and the keyboard switches are of primary importance, with aesthetics being secondary. The G413 certainly has a solid and quality feel to it, and LGS allows for as much customisability as you could possibly want.

That leaves the switches, which are probably the most important criteria for choosing your keyboard. This one comes down to personal preference. If you like tactile switches with a low actuation force and distance, given that the Romer-G switches are as good, if not better, than other tactile mechanical switches on the market, I am certain you will love this keyboard. However, if you prefer keyboards that give you more of a click, this is not the keyboard for you.

Another thing to mention is that this keyboard is not 10 keyless, which is another important feature about which people have their own preference. If you rarely use the numpad and are looking for a super lightweight keyboard or prefer to have your mouse and keyboard close together (as I do), you are better off looking elsewhere.

While the G413 scores highly on all the aforementioned criteria, what makes me hesitant about recommending it is the price – at ~$150 RRP, it is at the higher end of the price range of mechanical keyboards. However, if you like tactile switches with a low actuation force and distance, and are willing to spend that little bit extra for a little more quality, I can wholeheartedly recommend the G413 for both gaming and daily use.

More in this category: « Samsung Quantum Dot monitors (review) HP Sprocket – a printer in your pocket »
Share News tips for the iTWire Journalists? Your tip will be anonymous