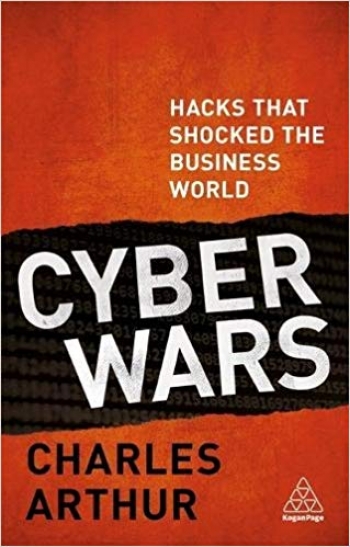 This is an interesting in-depth look at some of the more (in)famous hacks and intrusions in recent history.

Cyber Wars takes a close look at seven major incidents that have reached a high-level of public awareness, covering:

Charles Arthur devotes about 30 pages to each incident, giving some history and background along with a broad look at how the attack was perpetrated and the overall impact.

For instance, the book steps back to 1989 to identify the first ransomware attack, conducted by Joseph Popp, seemingly a very odd individual who took to wearing a cardboard box on his head in court – where he was judged unfit for trial.

Similarly, we have plenty of substance and background for all of the events included, which is what we should expect for a book coming from someone with a long history of freelance technology reporting.

As well as taking major incidents that were widely reported and were clearly in the consciousness of the general public, each chapter is intended as an example of various types of incident, ranging from direct "hacking" (the Podesta event), through typical ransomware to illicit data usage via outsourcing (the TalkTalk chapter). At the end of each chapter is a number of "lessons" - these are probably the most important part of the book.

Every chapter is well-researched and compellingly told. However, it seems the book lacks a clear understanding of who the intended reader might be. As someone with plenty of history and knowledge of the industry, this writer was pleased to be reminded of many incidents that had somewhat faded from memory, but it seemed the book was targeted more at the lay reader who sought the upmarket sensationalism and story-telling that is so amply delivered. But that reader would be unlikely to pick up the book in a bookstore.

Perhaps the best use might be as a reference guide to business leaders who require a broad review of hacking and intrusion to improve their understanding of business security. If you know someone like this, buy this book and give it to them for Christmas!

More in this category: « Data breach book: practical advice on how to handle aftermath of a break-in Logitech M325 mouse hits Aus »
BACK TO HOME PAGE
back to top