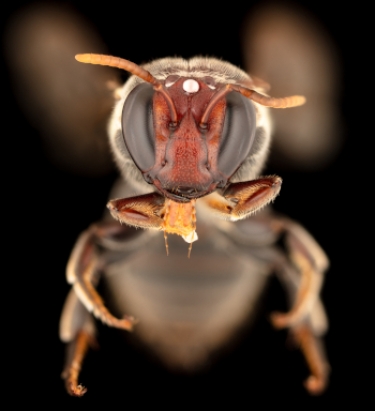 The female of the Meroglossa gemmata species. Photo: James Dorey

A team of Australian ecology researchers have found two species of Australian bees that have, for the first time, adapted their vision for night-time conditions, a research paper claims.

A statement from Flinders University said night-time foraging behaviour had been observed in the case of nomiine (Reepenia bituberculata) and masked (Meroglossa gemmata) bee species.

Both developed enlarged compound and simple eyes which allowed more light to be gathered when compared to their kin who operated during the day.

The researchers, who published their findings in the Journal of Hymenoptera Research, said it was possible that the improved low-light ability was also present in other Australian species which were secretly active at night, with their image processing ability best observed through high-resolution close-up images.

Doctoral candidate James Dorey, who is with the College of Science & Engineering at Flinders University and was one of four authors of the paper, says the two Australian bee species active at night and during twilight hours are mostly found in the tropical north, but there could potentially be more in arid, sub-tropical and maybe even temperate conditions across the continent.

The other three authors of the paper are Erinn P. Fagan-Jeffries of the University of Adelaide, Mark I. Stevens of the South Australian Museum, Adelaide, and Michael P. Schwarz of Flinders University, Adelaide.

“We have confirmed the existence of at least two crepuscular bee species in Australia and there are likely to be many more that can forage both during the day and into the early morning or evening under low light conditions," Dorey said.

"It’s true that bees aren’t generally known to be very capable when it comes to using their eyes at night, but it turns out that low-light foraging is more common than currently thought.

“Before this study, the only way to show that a bee had adapted to low-light was by using difficult-to-obtain behavioural observations, but we have found that you should be able to figure this out by using high-quality images of a specific bee.”

Dorey said bees that forage during dim-light conditions had not been studied enough, with no previously reliable published records for any Australian species.

“Our study provides a framework to help identify low-light-adapted bees and the data that is needed to determine the behavioural traits of other species," he said.

"This is important as we need to increase efforts to collect bee species outside of normal hours and publish new observations to better understand the role that they play in maintaining ecosystems.”