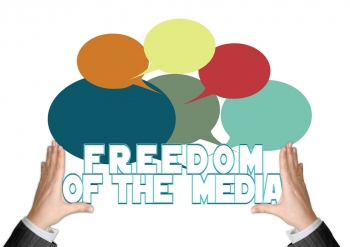 The open letter to US Attorney-General Jeff Sessions from ITIF published in USA Today on 25 September exemplified the lie that permeates America and other parts of the West. The social media censorship debate is not about right versus left as portrayed in the letter but something else entirely.

True conservatism and liberalism died long ago and no longer exist. Today, the real fight is between freedom of expression and global corporatism.

The censorship that is taking place on platforms such as Google, Facebook and Twitter, is the silencing and de-platforming of news and opinion sources outside of the corporate media.

It doesn’t matter what political persuasion these sources claim to be. If they are not working for the mainstream corporate media and their views don’t conform to the politically correct dictates of the establishment, they are increasingly likely to be censored.

It also appears that if you express views that are contrary to that of the mainstream corporate media, you are more likely to be simply kicked off corporate social media platforms the larger your following.

In a frightening new development, it seems you are now also in danger of having your access to online banking services terminated

Loud-mouthed Trump supporter and alternative news host Alex Jones is a prime example. When his account was terminated from YouTube, he had 2.6 million followers.  Recently, his banking services with PayPal have been withdrawn.

PayPal’s actions are inexplicable and disturbing because Jones runs quite a large media organisation and has not been accused of committing any crime.

However, Jones is not the only example nor is his perceived right leaning political persuasion the only target.

Celebrated Australian journalist John Pilger, a champion of the traditional socialist left, had his YouTube channel terminated long ago “due to multiple or severe violations of YouTube's policy against spam, deceptive practices, and misleading content or other Terms of Service violations".

Today, Hedges and Pilger appear regularly on Russian Government owned news site rt.com to get their voices heard around the world because, despite their impeccable journalistic credentials, the US corporatist mainstream media do not appear to be interested.

Apparently being a celebrity is no protection from retribution either if you openly express politically incorrect views online. Outspoken conservative Hollywood actor James Woods recently had his Twitter account suspended for tweeting a satirical meme about wimpy Democrat males.

But once again, this is not about the non-existent right versus left political paradigm but about freedom versus corporatism.

It appears that the corporatist media have finally realised that people are turning away in droves from TV and print for their news and opinion and are turning to the Internet in ever increasing numbers.

Attempts to control the narratives on globalism, war and cultural values have started to fail in the face of ever growing dissent fanned by online alternative news channels that beg to differ from the mainstream.

Thus, after failed attempts to ridicule and discredit the alternative online news sources, the mainstream has unashamedly resorted to open censorship to stem its critics and shut down the free flow of information.

As a result of the attempts to muzzle non-mainstream news and opinion on the leading social media platforms, alternative channels have presented themselves and are being increasingly used by disenfranchised content providers.

Alternative social media platforms such as Bit Chute, D.Tube and Gab are finding themselves gaining an active user base by default. Duckduckgo has presented itself as a viable search alternative for users who value their privacy and don’t want to be tracked.

Meanwhile, many non-mainstream news content providers on YouTube, preparing for the day when their accounts are wiped, are advising their audience that their content is also available on alternative online platforms, a primary one being their own websites.

However, it would be wrong to assume that the alternative online media is a cohesive force. It is, in fact, a very fractious sector covering a wide spectrum of contrary views and opinions.

Some believe that the US Government should intervene, break up, and regulate the major social media corporations because they are too big and have abused their respective dominant market positions. Others insist that the government should stay out of the fracas altogether and simply let the alternative media go its own way on alternative platforms.

Those who favour the second option may pause to think again, however, because they will find that they are in perfect agreement with their foes in the corporatist media.

More in this category: « The most dangerous drug of addiction Why I opted for an OPPO F9 instead of an iPhone XR »
Share News tips for the iTWire Journalists? Your tip will be anonymous