NBN Co a monopoly? Maybe, but not like Telstra was because of 5G Featured 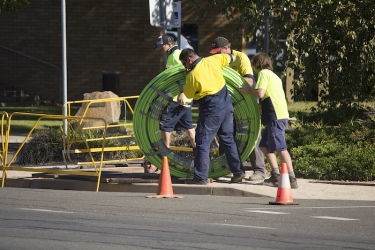 Earlier this week, the well-known Australian telecommunications market analyst Paul Budde penned an article in which he asserted that NBN Co, the government-owned fixed line national broadband provider, had become a monopoly similar to Telstra in its days of being a vertically integrated wholesaler and retailer of telecommunications services. I beg to differ.

As much as I respect Paul, the NBN Co of today and the Telstra of yesteryear are as similar as chalk and cheese. The reason is that the market has moved on from the days when Telstra was a monopoly and the only option.

The penny still has not dropped for many in the Australian consumer and business spaces, but whether they realise it or not today they have options.

The three biggest customers of NBN Co – Telstra, Optus and TPG – each happen to be profitable monolithic enterprises which own extensive mobile voice and data networks that already reach a far higher percentage of the population than the NBN will ever reach with its fibre, cable or satellite services to customers.

Yes, all three of Australia’s mobile operators also resell NBN services but it is crystal clear that they know on which side their bread is buttered with respect to growth of income and it isn’t in the resale of over-priced fibre plans.

In a right of reply article, Aussie Broadband explained that the company was losing money on the top tier plan basically because the wholesale price was simply too high for the amount of bandwidth NBN Co was allocating and Aussie was continually having to pay for overage.

The fact of the matter is that NBN Co being wholly government-owned is an inefficient company built on the back of $57 billion of Australian taxpayers funds, with billions more to be spent, has never come close to breaking even and almost certainly will never make a profit.

Meanwhile, in a separate article, Varghese, who is also a reviewer, wrote an article about a fixed line 5G connection he was given by Optus for review.

In that review, he described Optus’ wireless 5G service as an ‘NBN killer’ after reporting that in the areas that had coverage it was delivering download speeds in the order of 400 Mbps and upload speeds of 20 Mbps (and sometimes 4 Mbps).

And therein lies the point – in Australia, the mid-band 3.5 GHz buildout is still in its early stages but upgrading 4G towers and existing backhaul pipes is going to progress a lot faster and more cheaply than the Government spending billions more of taxpayer funds building FttH connections.

As a case in point, across the ocean in Switzerland, the majority government-owned broadband provider Swisscom is already reaching 90% of that country’s population with 5G delivering up to 1 Gbps.

Yet Swisscom has promised to ramp up its buildout of FttH so that by 2025, its fibre network will double its present-day coverage of 30% to 60%, which currently delivers speeds of up to 200 Mbps.

Even today in Australia, as TPG Australia boss Iñaki Berroeta pointed out in a recent keynote address there are many broadband customers who prefer 4G fixed wireless broadband services to NBN services – and TPG is Australia’s second largest NBN reseller after Telstra!

The Australian Government is now touting 2021 as the ‘Year of 5G‘ and will be holding spectrum auctions for mmWave 5G in the 26 GHz band and low-band 5G in the 850/900 MHz band.

The way the government sees it working is that the medium range mid-band 5G seems to be suitable for the densely populated cities where most Australians live, the long range low-band 5G will cover the outlying areas in regional and rural Australia, and the high-band with short-range small cells will be suitable for areas like shopping centres, sports arenas, airports and so on.

That also seems to be the way the 5G systems are being deployed in China, which is already far more advanced in its 5G rollout than much of the world.

So coming back to the question of NBN Co behaving like a monopoly, well, yes, for the companies who rely on reselling NBN fixed-line services, it is. However, there are many telcos who would rather resell wireless services and, importantly, many businesses who would prefer to be connected by wireless WANs.

Thus NBN Co can try to flex its muscles and behave like a monopoly with its retail customer base if it wishes, but it will find, unlike the Telstra of old, its muscles will rapidly deteriorate in line with a shrinking customer base, as 5G increasingly comes online. Then again, all those 5G towers are going to need lots of fibre for their backhaul.

This article first appeared on wirefreez.com.

More in this category: « Apple Q3 results reveal weak link in the growth chain
Share News tips for the iTWire Journalists? Your tip will be anonymous