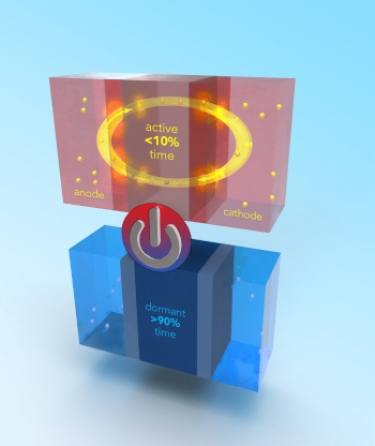 An illustration of a new lithium-ion battery that is both safe and high-performing, developed by researchers at Penn State. Jennifer McCann/Penn State

A team at the Pennsylvania State University has developed a lithium-ion battery that can last for a million miles in an electric vehicle, is safe and also has high power.

The university's Battery and Energy Storage Technology Centre developed the All Climate battery which it said had been taken up by several automobile firms. It would be used to power 10,000 vehicles to carry spectators between venues at the next Winter Olympics in Beijing.

Batteries that are used in electric vehicles need to be strike a balance between safety and energy density; high energy and power density could mean that the chance of it catching fire or exploding were present.

But using materials that had low energy and power density meant that while it would be safe, the performance would be poor.

Chao-Yang Wang, professor of mechanical, chemical and materials science and engineering, and William E. Diefenderfer Chair in Mechanical Engineering, Penn State said for this project the strategy was divided into two steps: first the team wanted to build a highly stable battery with highly stable materials.

The introduction of instant heating was the second step. Wang had developed a self-heating battery about four years back to surmount the problem of poor performance in cold climes. An electric current is used to heat up in seconds, from room temperature to about 60 degrees Celsius and this gives the battery an immediate boost in reactivity, given that the law of kinetics is that reactivity increases exponentially with temperature.

Wang said these two steps meant the battery would be safe when not being used and provide high power when it was in use.

The safety of the battery was tested by using nail penetration gear, driving a nail into the centre of cell and short-circuiting it, while testing it for temperature and voltage.

Their tests showed that the temperature difference for a passivated cell was 100 degrees Celsius while for a standard battery cell is was 1000 degrees Celsius. Passivated refers to coating with an oxide layer to increase electrical stability.

As stable materials are used to make the battery, it lasts for more than 4000 cycles even at 60 degrees Celsius which translates to about a million miles.

The team is now planning to develop a solid-state battery. As iTWire reported this week, Canadian utility firm Hydro-Québec has said it would begin work on commercialisation of an all-solid-state battery co-invented by Dr John Goodenough, a professor at The University of Texas in Austin, and Dr Maria Helena Braga, an associate professor at the University of Porto in Portugal.