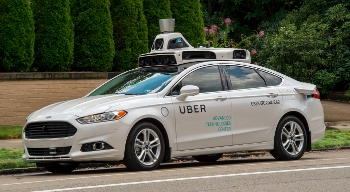 Uber has been ordered to stop a self-driving service in San Francisco after two of its vehicle were reportedly spotted going through red lights.

According to the Associated Press, the company was told to take its self-driving cars off the roads until it obtains the permit needed for testing autonomous vehicles on public roads.

The California Department of Motor Vehicles said Uber was expected to secure such a permit but the company claimed it did not need this clearance as a driver was also present in its autonomous vehicles that were on the roads.

Uber has been running such trials in Pittsburgh and the San Francisco trial is an extension of the programme.

The DMV statement read: "We have a permitting process in place to ensure public safety as this technology is being tested. Twenty manufacturers have already obtained permits to test hundreds of cars on California roads. Uber shall do the same."

The report of Uber autonomous vehicles going through red lights was published in the San Francisco Examiner.

The newspaper published video that showed a self-driving car going through a red light at the same time as a pedestrian was attempting to use the zebra crossing to cross the road.

The Examiner also quoted a tweet from a freelance writer saying: "Just passed a 'self-driving' Uber that lurched into the intersection on Van Ness [Avenue], on a red, nearly hitting my Lyft."

More in this category: « Connected cars to drive 98% of all M2M traffic Apple sued over texting driver's accident »
Share News tips for the iTWire Journalists? Your tip will be anonymous