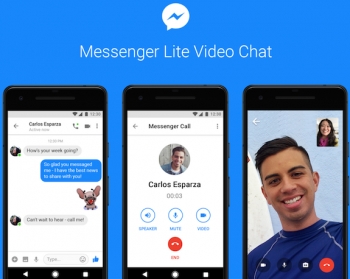 If you're plagued by slow Internet connectivity, or have an older Android device or one running Android Go, but still want video calls, Facebook Messenger Lite has a video message for you.

Facebook has announced in an official blog post that video chat has arrived to its Messenger Lite app.

This app, which is "rollout out starting today," is "a slimmed down version of Messenger for Android that offers the core features of the app while giving everyone the opportunity to stay connected to their friends and family, intended for people with older Android devices and/or slower Internet connections."

Facebook reminds us that "video chats are an expected and essential part of everyday communication in today’s messaging experience.

"Chatting face-to-face live is perfect for those moments when you want to see and hear the voices of people you care about most – whether you’re wishing someone a happy birthday, you have some great news to share, or you spontaneously want to catch up on the day".

Indeed, it should come as no surprise to see Facebook stating that "video chats are incredibly popular for people who use the Messenger core app.

"Now people who use Messenger Lite can have the same rich and expressive face-to-face conversations as those who use the core Messenger app, no matter which technology they use or have access to."

So, how does it work?

Well, to get started, Facebook says to "make sure you have the latest version of Messenger Lite.

"Open an existing conversation or find the person you’d like to chat with in your contact list, then tap the video icon on the upper right corner of the screen.

"You can also upgrade an audio call to a video chat while still in the call by tapping the video icon in the bottom right corner of the screen."

As you'd expect, Facebook says it is "excited to bring you the ability to have face-to-face conversations with those who matter the most to you, wherever they are".

Being rolled out from today, Facebook says it looks forward "to hearing what you think".

More in this category: « Go ogle Android Pay becoming Google Pay in Australia following new app launch No solace for Uber as Ola officially launches in Sydney »
BACK TO HOME PAGE
back to top