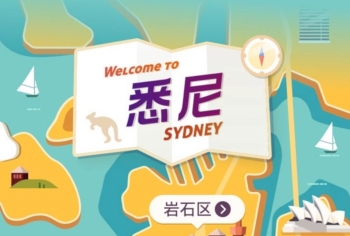 Mobile payment service Alipay and Tourism Australia have launched a interactive mobile map to promote Sydney to Chinese tourists ahead of the Chinese New Year festive period which falls this month.

A joint statement said Sydney would be the pilot city, with tourist and retail locations to be promoted during the period.

The map, known as the Sydney City Card (below, right), will have special geo-targeted promotions in areas like The Rocks, Darling Harbour, the Sydney Fish Market, Sydney Airport, Westfield Sydney, and Sydney Chinatown.

The map will operate through the Alipay app which has more than a billion users. Tens of thousands of Australian dealers accept Alipay and more than a hundred leading retailers and tourist destinations - among them BridgeClimb Sydney, the Sydney Aquarium, and Captain Cook Cruises - are part of the year-long pilot.

About 400 million Chinese travellers will make journeys during the week-long New Year holiday, with many heading to Australia.

Alipay Australia and New Zealand country manager George Lawson said: “The Sydney City Card pilot is an innovative approach to engaging with our largest tourist market, and provides Australia with a critical advantage over other regional tourist hotspots during this peak annual travel period.

“Chinese tourists will be able to access recommendations on what to see, where to shop and how to get around, all within an app they are familiar with and while being offered their preferred payment method around the city. Providing this tailored and convenient customer experience is critical to maintaining and enhancing Australia’s reputation as a leading international tourist destination for Chinese travellers.”

Tourism Australia managing director John O’Sullivan said: “Lunar New Year is an increasingly important time of the year for Australian tourism. We’re seeing more and more of China’s emerged and emerging high value travellers looking to use this key holiday break as an opportunity to travel overseas and to popular wish list destinations such as ours.

Today’s new generation of free and independent Chinese traveller has extremely high demands of an overseas destination, and a big part of meeting those expectations is undoubtedly around convenience and being made to feel welcome.

“We know the huge importance that Chinese travellers attach to Alipay as a preferred and trusted mobile payment system, and I have every confidence that the added value they’ll receive from the new Sydney City Card will prove hugely popular, by making the on-the-ground holiday experience easier and more engaging.”

The program will run concurrently with a similar initiative in Queenstown, New Zealand, and it may be expanded to major tourist destinations in the two countries.

More in this category: « US team working on real-time fact-checking app Simple reminders can save thousands per year: GetReminded »
BACK TO HOME PAGE
back to top