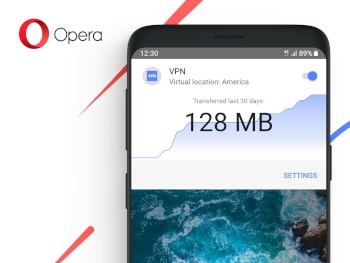 Norwegian browser maker Opera Software has added a built-in no-log VPN service to its latest version for Android, Opera 51, the company says in a statement.

Opera Software had a separate VPN client for Android and iOS but had to stop offering it last year, when the company that was providing it, SurfEasy, was acquired by Symantec.

No announcement has yet been made on including built-in VPN services for Opera on iOS.

As with its desktop version, the Opera for Android browser offers a choice of virtual locations for the VPN service: the optimal location (selected by the software), the Americas, Europe and Asia.

"With Opera they can now enjoy a free and no-log service that enhances online privacy and improves security."

The statement said the built-in VPN would be especially useful for people on the move who used public Wi-Fi a great deal, as they could now prevent malicious third-parties from collecting sensitive information.

“The fact is that users are exposed when they connect to public Wi-Fi without a VPN,” said Wallman.

“By enabling Opera’s browser VPN service, users make it very difficult for third parties to steal pieces of their information and can avoid being tracked.

"Users no longer need to question if or how they can protect their personal information in these situations.”

Opera has been in the browser business since 1995 and also sells AI-driven content delivery solutions to about 320 million people globally.