Sage moves HandiSoft to the cloud 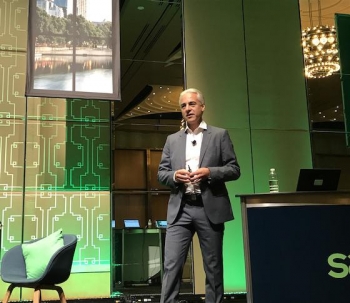 Accounting software provider Sage is preparing to release a cloud version of its HandiSoft practice management software, along with an integration platform that will work with the cloud and on-premises implementations of HandiSoft.

Sage APAC executive vice-president Kerry Agiasotis joined the company in September 2017. "We've driven a lot of change in the product line" since then, he said.

"I listened to our customers": the world was changing, so Sage needed to change too.

The company's core product is the HandiSoft accountancy practice management software. While Sage will continue to develop and support the traditional desktop version of the software, it is preparing to launch a cloud implementation to be called HandiSoft Online.

Clients who stay with the on-premises version will continue to receive all the advances made to the software, he assured attendees at the Sage Sessions conference in Melbourne.

Perhaps more significantly. Sage has invested in the development of an API to support the integration of HandiSoft and HandiSoft Online with other software.

This integration is achieved through the Sage Accountant Cloud, which is built on Salesforce's Force.com.

Consequently, Sage partners and customers can create their own applications by using Force.com's no-code or "pro-code" development tools.

It also allows integration with the thousands of applications available in the Salesforce AppExchange.

In addition, the APIs support integration with a range of third-party applications including Office 365, MYOB, MyWorkPapers, SAS 360 and SimpleFund 360.

Another new element is the Sage Data Hub, a cloud-based data warehouse that sits beneath HandiSoft and HandiSoft Online. Tools are provided to ingest data from anywhere, but the first ready-made adaptor is for MYOB.

All of these new capabilities are available whether customers upgrade to the new version of HandiSoft or switch to HandiSoft Online.

"We've been busy," said Agiasotis. More than 80% of Sage's Australian revenue comes from locally-developed products, and HandiSoft accounts for around 50% of the business, he told iTWire.

But "my competition tomorrow is the banks ... [and] the ATO,"Agiasotis said, noting that Westpac recently made invoicing software available as part of its banking platform.

One company can't be the best at everything, so rather than trying to do it all, Sage needed to play specific roles within a broad ecosystem, and to support integration with other outstanding products, he said.

However, openness is relative, Agiasotis observed, noting that only Xero partners have full access to that product's APIs. "There's still an inherent fear of losing control."

Sage's strategy is to be clear about who we are, and what problems we are solving, and then "be as open as we possibly can be," he said.

Instead of continuing to focus on the Sage accounting software plus the practice management software to cement it together, "we've pivoted" – the company still offers small business accounting software, but HandiSoft will work well regardless of the software used by a practice's clients.

"Every vendor is looking to do it wall-to-wall for their patch," but no accounting practice is 100% satisfied with one brand, he said.

Agiasotis also believes the recent confirmation that single touch payroll (STP, the regime that requires payroll transactions to be reported to the ATO at the time they occur) will be extended to even the smallest employers represents an opportunity for Sage, as it is already a major player in outsourced, hosted and on-premises payroll.

"We're using STP as a catalyst to change thinking," he told iTWire. For example, small businesses could provide payroll information to their accountants via the portals which are part of Sage's platform. That data could flow into payroll software operated by each practice at a much lower cost per employee than would be possible if each business ran its own payroll software.

More in this category: « Square integrates with MYOB Xero offers payroll-only plan »
back to top