You have to be impressed with IBM's fundamental scientific research projects. Early this year I reported how they had demonstrated ultra-high resolution MRI microscopy.

IBM has been a pioneer in nanoscience and nanotechnology ever since the development of the scanning tunneling microscope (STM) in 1981 by IBM Fellows Gerd Binnig and Heinrich Rohrer at IBM’s Zurich Research Laboratory. For this invention, which made it possible to image individual atoms and later on to manipulate them, Binnig and Rohrer were awarded the Nobel Prize in Physics in 1986.

The atomic force microscope (AFM), an offspring of the STM, was developed by Binnig in 1986. The STM is widely regarded as the instrument that opened the door to the nanoworld.

Now -- in collaboration with the University of Regensburg, Germany, and Utrecht University, Netherlands -- IBM researchers, measuring with the precision of a single electron charge and nanometer lateral resolution, have succeeded in distinguishing neutral atoms from positively or negatively charged ones.

They regard this as a milestone in nanoscale science which opens up new possibilities in the exploration of nanoscale structures and devices at the ultimate atomic and molecular limits. These results hold potential to impact a variety of fields such as molecular electronics, catalysis or photovoltaics.

As reported in the June 12 issue of Science magazine, Leo Gross, Fabian Mohn and Gerhard Meyer of IBM’s Zurich Research Laboratory in collaboration with colleagues at the University of Regensburg and Utrecht University imaged and identified differently charged individual gold and silver atoms by measuring the tiny differences in the forces between the tip of an atomic force microscope and a charged or uncharged atom located in close proximity below it.

To conduct these experiments, researchers used a combined STM and AFM operated in vacuum at very low temperature (5 Kelvin) to achieve the high stability necessary for these measurements.

The AFM in principle uses a sharp tip to measure the attractive forces between the tip and the atoms on a substrate. In the setup of the present work, the AFM uses a qPlus force sensor consisting of a tip mounted on one prong of a tuning fork, the other prong being fixed.

The tuning fork, which is like those found in ordinary wristwatches, is actuated mechanically and oscillates with amplitudes as small as 0.02 nanometer—which is about one-tenth of an atom’s diameter. As the AFM tip approaches the sample, the resonance frequency of the tuning fork is shifted due to the forces acting between sample and tip. By scanning the tip over a surface and measuring the differences in the frequency shift, a precise force map of the surface can be derived.

The extremely stable measurement conditions were crucial for sensing the minute differences in the force caused by the charge state switching of single atoms.

The difference between the force of a neutral gold atom and that of a gold atom charged with an additional electron, for example, was found to be only about 11 piconewton, measured at the minimum distance to the tip of about half a nanometer above the atom.

The measurement accuracy of these experiments is better than 1 piconewton—which is equal to the gravitational force that two adults exert on each other over a distance of more than half a kilometre. Moreover, by measuring the variation of the force with the voltage applied between tip and sample, the scientists were able to distinguish positively from negatively charged single atoms.


This breakthrough is yet another crucial advance in the field of atomic-scale science. In contrast to the STM, which can be used only on conducting materials, the AFM is independent of conductivity and can be used for investigating materials of all kinds, most importantly insulators.

In the field of molecular electronics, which aims at using molecules as functional building blocks for future computing devices, as well as for single-electron devices, an insulating substrate is needed in order to avoid the leakage of electrons. This makes noncontact atomic force microscopy the investigation method of choice.

“The AFM with single-electron-charge sensitivity is a powerful tool to explore the charge transfer in molecule complexes, providing us with crucial insights and new physics to what might one day lead to revolutionary computing devices and concepts,” explained Gerhard Meyer, who leads the STM and AFM-related research efforts at IBM’s Zurich Research Laboratory.

To study the charge transfer in molecule complexes, scientists envision that, in future experiments, single atoms could be connected with molecules to form metal-molecular networks. Using the tip for charging these atoms, scientists could then inject electrons into the system and measure their distribution directly with the non-contact AFM (see figure 2).

IBM researcher Leo Gross points out other areas of impact beyond nanoscale computing: “The charge state and charge distribution are critical in catalysis and photoconversion. Mapping the charge distribution on the atomic scale might deliver insight into fundamental processes in these fields.”

This achievement follows a string of remarkable scientific advances achieved by IBM scientists in recent years and represents a fundamental step towards building computing elements at the molecular scale—computing elements that are expected to be vastly smaller, faster and more energy-efficient than today’s processors and memory devices. 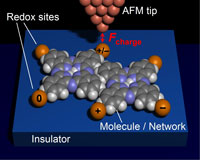 Using the qPlus AFM, a team at the IBM Almaden Research Center was the first to measure in 2008 the force necessary to move an atom over a surface, paving the way for the present experiment.

In 2007, Gerhard Meyer’s team at IBM’s Zurich Lab demonstrated a single-molecule switch that can operate flawlessly without disrupting the molecule’s outer frame or shape.

In 2004, the same group controllably manipulated the charge state of individual atoms using an STM. By inducing voltage pulses through the STM tip, they succeeded in charging an individual atom on a thin insulating film with an additional electron. Importantly, the negatively charged atom remained stable until a voltage pulse with the opposite bias was applied via the STM tip.

This is the method used by scientists in the present experiments to charge the individual atoms.

BACK TO HOME PAGE
Published in A Meaningful Look
Tagged under